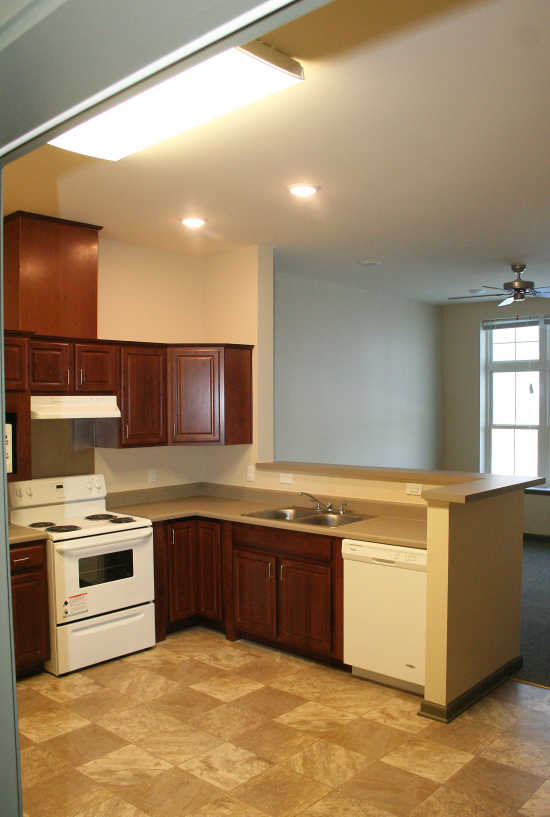 One of the old Miller School classrooms, still featuring old school-building windows, stands ready for occupancy in its conversion into a senior apartment. (Banner Graphic/ERIC BERNSEE)

Did you win a trophy participating for Miller Elementary School in the Greencastle Little Olympics back in days of yore?

Does an old Miller School T-shirt still hang in the back of your closet?

Got an old school pennant? Class photos? Some pencils or a notebook embossed with "Miller School"? 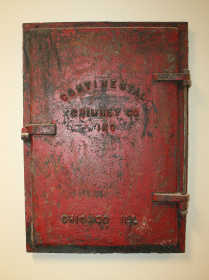 While those items might be worth a few pennies on eBay, such Miller School-related memorabilia would be priceless to the developers of the Miller Asbury senior community apartment project who plan to display them in cases lining the wide old school hallways.

"We'll take anything. Anything that has to do with the old school," Milestone Ventures local representative Kim Hall said on a recent trip down memory lane that wound its way through the old building and its adjacent new wing. "We're open to anything we might be able to use."

Miller School memorabilia can be either donated or loaned to the Indianapolis-based developers, Hall said.

In the meantime, the Miller Asbury project -- in the final stages of converting the historic old school building at 522 Anderson St. in Greencastle into senior (age 62 and over), subsidized housing -- will have an open house and its grand opening from 3-6 p.m. on Thursday, Dec. 17. Hopefully by that time, its hallways will be brightened by display cases festooned with local memorabilia.

Meanwhile, Dec. 4 has been tentatively set by Milestone as its move-in date for Miller Asbury tenants.

Longtime Greencastle resident Ed Neumann, whose mother will be residing in one of the units along the Anderson Street side of the old school section, will provide the maintenance at Miller Asbury. He should know the old building quite well, having gone to first, fourth and sixth grades there.

Morphing old Miller School into the Miller Asbury senior rental community has taken little more than a year after Mayor Sue Murray first put a sledgehammer to work on the old addition that stood south of the main school building back in late September 2014.

"Hopefully," Milestone Ventures principal Chuck Heintzelman said in what seemed an ambitious statement at the time, "we'll all gather back together in about a year and the mayor can cut the ribbon next time."

Whether that fits in the schedule of the final days of Mayor Murray's second and final term is yet to be seen.

She has, however, recalled how back in 2012 Greencastle officials were surprised to learn the Miller School building was actually the property of the City of Greencastle, not the school corporation.

"It's not very often you get a surprise like that," she said of the school building constructed in the 1920s and still bearing designated "Girls" and "Boys" entrances above its east and west entries. "Surprise! You now own an old building full of asbestos."

Asbestos abatement, however, was completed long ago and the building has "turned out to be a wonderful, wonderful blessing for the city and the neighborhood and the park," the mayor said.

In October 2014, the City Council unanimously accepted Milestone Ventures' $250,000 purchase price for the Miller School property, a figure reportedly well above the appraised value of the building and a nearly three-acre parcel of real estate adjacent to Robe-Ann Park.

Subsequently Milestone Ventures received funding approval from the Indiana Housing Community Development Authority (IHCDA), which allowed a $6 million loan, on a two-year payback, for the Miller Asbury development. The project previously had been awarded $681,399 in tax credits.

The site was last used as an educational facility in 2010 when it served as the Greencastle Community School Corporation offices. The last time the main building actually housed classes was in 1980, although the added section that was razed by the current project was later home to the Area 30 Career Center.