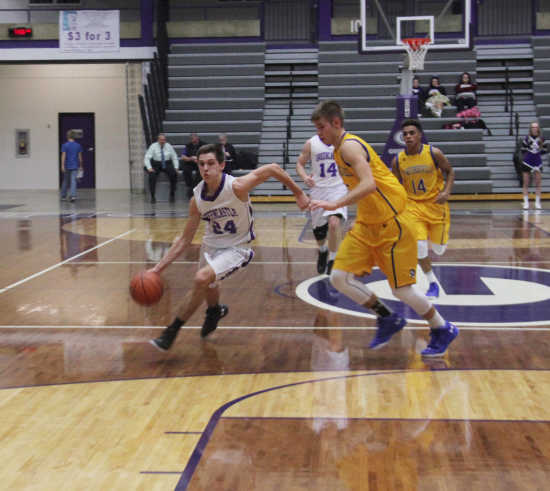 The Greencastle boys' basketball team held a five-point halftime lead even with the low free throw percentage but Crawfordsville gained the upper hand in the second half and walked away with the win in the season opener 63-54 Tuesday.

Colin York knocked down four shots for nine points in the first including an off-balanced, buzzer-beating, three-pointer in the corner to end the quarter.

Into the second scoring took a backseat to defense. After an 18-13 GHS lead to start the second each team scored just seven. The Tiger Cubs only made three shots in the second and with the Athenians in the bonus for almost the entire quarter, GHS missed six foul shots in the quarter, going 2-9 in the first half.

Into the third, GHS picked up the scoring again but Crawfordsville was able to take the upper hand, hitting four threes in its 25-point quarter.

When the Athenians weren't setting up from long-range, they were grabbing the boards and getting points off the fast break.

Coble continued to play well from the field, scoring 11 including a three-pointer. The Athenians had trouble stopping the Greencastle senior as he scored five of the seven baskets in the third. But Crawfordsville still took a 45-41 lead into the fourth.

"We have to figure out some things as far as getting more people involved," Greenlee said. "That's our job to figure out what we can do to get some production from other guys. I thought that Ryan was outstanding at times, scoring and he got the ball to some guys that were open. We've just got to convert."

GHS was better from the foul line in the fourth quarter, shooting 11-14, which was good as the Tiger Cubs only made one shot from the field courtesy of Jacob Sanders.

The GHS defense was stout as well with Crawfordsville only making two field goals. Unfortunately for Tiger Cub fans, the Athenians went 14-18 from the foul line to help secure its victory.

Greenlee said his Tiger Cubs weren't where he wanted them to be yet in the early season and he hopes to see more urgency out of the defense as the season progresses.

Greencastle's next match will be at Danville Saturday night.