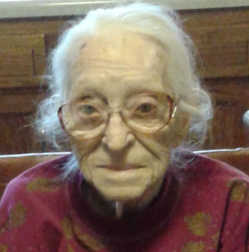 She was born in Beech Grove, on Jan. 20, 1928 and was the daughter of the late Leroy Ogdon Klinefelter and Carrie Alice (Vorhis) Klinefelter. She married Warren Jerome Worthington and he preceded her in death.

She was a member of the Mt. Hebron Community Church, a graduate of Cloverdale High School and the Indianapolis School of Nursing. She had a long career as a registered nurse and had been employed at St. Joseph's Hospital at Tampa, Fla., Asbury Towers and the Putnam County Hospital, from which she retired in 1993.

She was a veteran on the United State Air Force serving as a nurse and was stationed in Japan during the Korean Conflict.

Her favorite sports teams were the Indiana Pacers and the Green Bay Packers and she enjoyed figure skating, horse races, John Wayne, reading books and listening to music.

In addition to her parents and husband she was preceded in death by her eldest son, Stephen John Worthington, and her sister, Freida Carol Patton.

Funeral Services will be held at 2:30 p.m. on Wednesday, Dec. 2 at the Whitaker Funeral Home, Cloverdale. Visitation will take place from 1:30 p.m. until service time at the funeral home.

Interment will be in the Cloverdale Cemetery with military honors.