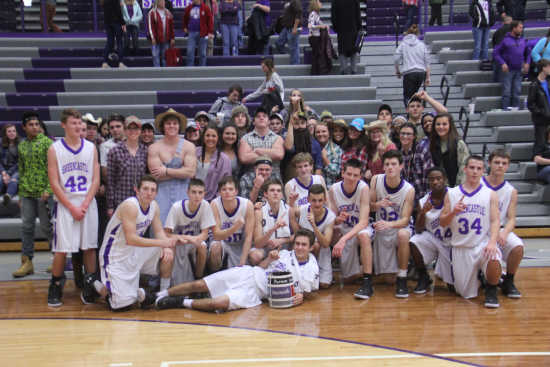 Greencastle took back the Putnam County Pride Bucket Saturday night when the Tiger Cubs defeated North Putnam 77-34. GHS jumped out to a 19-5 lead and maintained it throughout.

"That's actually the first time I've ever grabbed the bucket," GHS senior Ryan Coble said. "So it was pretty thrilling to hold it and take it to the cheer block and sing the fight song. It was pretty exciting."

The win against its rival Cougars was the first of the season for Greencastle and Tiger Cub coach Troy Greenlee will be looking continue the success by having multiple players get in on the offensive action. 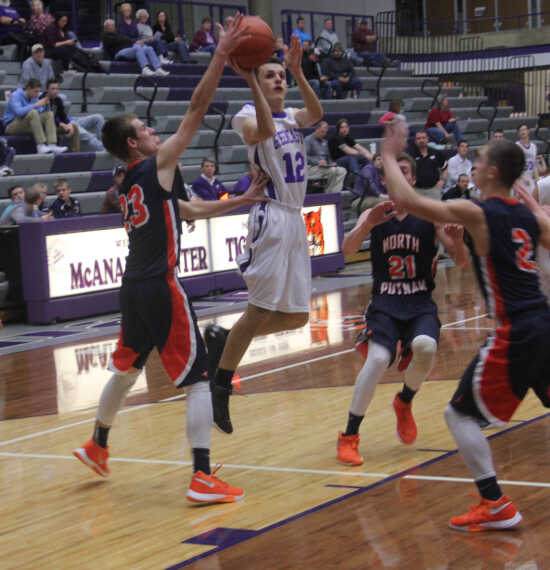 Zack Wilkerson puts up a jumper over the Cougar defense on Saturday during the Greencastle win at McAnally.(Banner Graphic/JAY LOCKETT)

"We had a lot of guys do a lot of good things tonight," Greenlee said. "We shared the ball well. We we're active defensively. It's a lot of things that we've been talking about tonight came together at both ends of the floor."

In the first Coble scored 10 points with Colin York knocking down a three. In the second it was JT Mathews who was able to fight on the glass and pick up eight of his 10 points in the period. Matthews led the Tiger Cubs with eight rebounds. 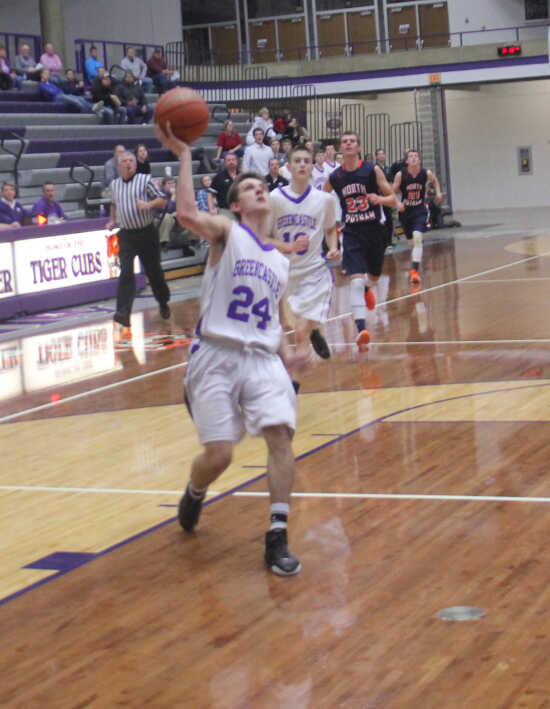 Ryan Coble takes it to the hole after a steal in the backcourt. (Banner Graphic/JAY LOCKETT)

Nick Costin scored five of his 10 in the second and Greencastle was in complete control by halftime.

"We've been trying to get some other guys involved offensively," Greenlee said. "We told 'You guys have got to be threats.' Whether shooting the ball from the perimeter or driving to the basket. I thought we saw some of that tonight. Guys go the ball from Ryan or Colin and were aggressive with it. That's what we have got to have."

Greenlee said his defense was active and he and his Tiger Cubs talked about getting their hands on the ball to disrupt opposing offenses. 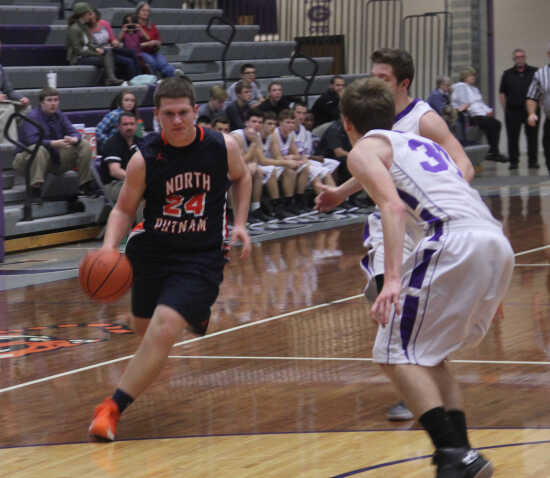 North Putnam struggled to get into any offensive rhythm as many times Coble or York would steal the ball and convert it at the other end happening on consecutive plays in the second quarter. Coble had six steals on the night and York earned four.

"In a way it was a little like Southmont except we weren't in as much foul trouble," NPHS coach Colin McCartt said. "We just came out defensively and I don't think we were focused on the game plan. We didn't take care of the ball early. We probably had 30 turnovers tonight. It was uncharacteristic of these guys."

Austin Judy led the Cougars with 10 points, scoring five of the Cougars' 10 points in the third. 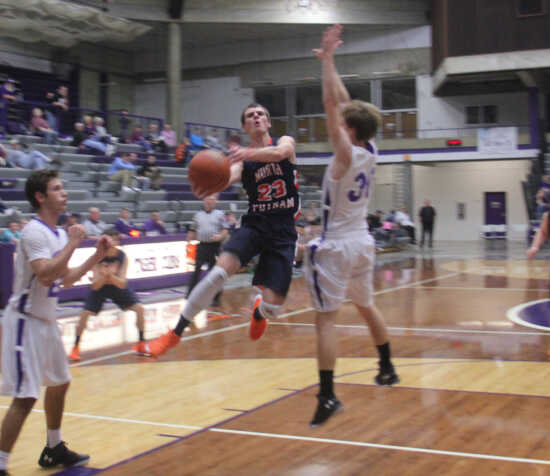 Austin Judy of North Putnam hangs in the air to avoid a Greencastle defender in Saturday's loss against the Tiger Cubs. (Banner Graphic/JAY LOCKETT)

Greencastle, however, continued to pour it on after the break with its best quarter offensively coming in the third with 25 points from a balanced scoring attack. York scored nine of his 17 points in the third and GHS pushed the lead to 63-24 at the start of the fourth.

"We were just being active," Greenlee said. "We trapped the ball well. We made it hard for them to get the ball where they wanted to get it. We talked a lot about deflections and I don't know the stat totals for that but I know we got a lot of deflections tonight."

Greencastle called off the dogs in the fourth quarter, allowing Coble to run with the JV squad near the end of the game.

"I think it takes a lot of teamwork to get a team win," Coble said. "Obviously we have me and Colin but if we can get our other players involved in the game it'll give us a way better chance of winning and performing like this."

North Putnam scored 10 in the fourth, seven off free throws and the Cougar coach said this one NPHS will just have to forget.

"I still believe we are doing the right things in practice," McCartt said. "This is a game we just have to put behind us. Understand what we did wrong, put it behind us and move on. That's all we can do."

North Putnam will travel to Eminence on Tuesday to face the Eels.