The Putnam County-filmed movie "Reparation" closed 2015 by winning the Best Film Award at the Dec. 2-6 Santa Fe Film Festival in New Mexico this past weekend. 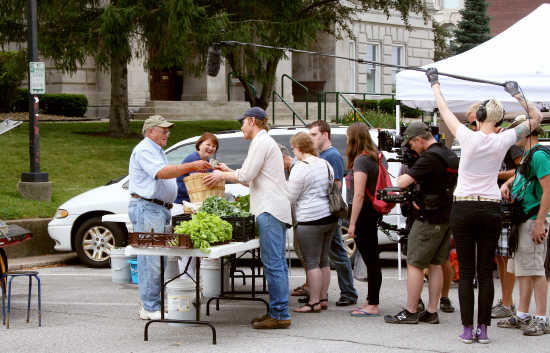 Written by DePauw University Professor Steve Timm and Kyle Ham (DePauw class of 1994), "Reparation" was filmed entirely in Putnam County during the summer of 2014.

The producers are currently working with The Little Film Co. in Los Angeles to secure distribution for the film, which looks to release in 2016.

Charlotte seeks a closer bond with her father whom she loves, but struggles to understand. That bond materializes in a powerful way when Jerome, claiming to be one of Bob's Air Force buddies, shows up -- and she recognizes him. As Bob's most traumatic memories seem to bubble up from somewhere deep in her DNA, she must find a way to illustrate them for her father before it is too late.

Tag-teaming with Dale on the production of "Reparation," Dale's twin sister Ella provided much of Charlotte's background artwork for the film, and even doubles as Charlotte herself in a few key sequences, such as one of the opening shots of the film where Charlotte is drawing in her backyard.

During filming in Putnam County nearly 500 residents, including patrons at the Greencastle Farmers Market, participated in the making of "Reparation" as extras, caterers, drivers, crew and costume assistants.

"People opened their businesses and their homes to us," co-writer and producer Steve Timm said. "They offered up their time, talents and energy to make this film."

"You hear the term 'filmmaker' thrown around a lot," director Kyle Ham added, "usually in reference to the director, writer or producer. However, we consider this film to be community-made in the truest since. 'Reparation' simply wouldn't have been realized without the creativity, hard work and enthusiasm of the people of Putnam County and DePauw University."

Critical response to the film has been overwhelmingly positive.

Film critic and festival juror David Wilson of Bradford, England, calls it "a brilliant script ... extremely well shot and the acting was brilliant throughout across all the characters."

Critic Tripp Stelnicki of the Santa Fe New Mexican labels the film "an expertly constructed thriller ... which erupt(s) in a taut and gut-wrenching final 15 minutes."

And Laura K. Marsh writing for the Santa Fe Film Festival adds, "Reparation will make you feel perfectly unbalanced and slightly on your toes until the very, circle-closing end" and urges festival participants to "pick this one if you don't pick any others."