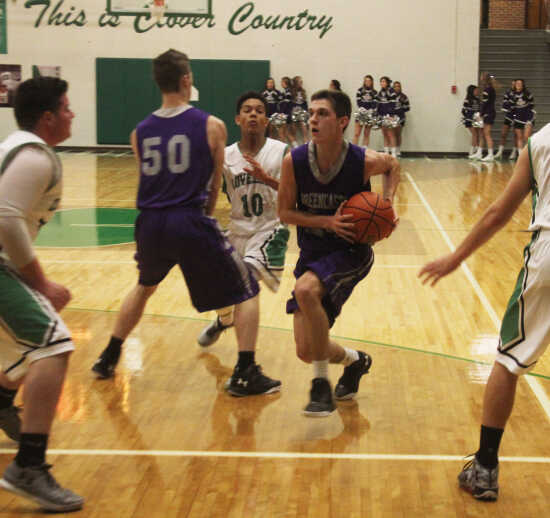 After a 13-point Cloverdale lead GHS stormed back, taking the lead late in the fourth behind some three-point shooting by Nick Costin who hit two big shots, one in the third and one in the fourth, to help the Tiger Cubs earn the lead.

"I'm just grateful honestly," GHS senior Ryan Coble said. "Cloverdale's a great team. The first half we didn't play very well. We left Cooper (Neese) and (Jalen) Moore open. They are two great players but we came out in the second half and we decided that we had to play with effort." 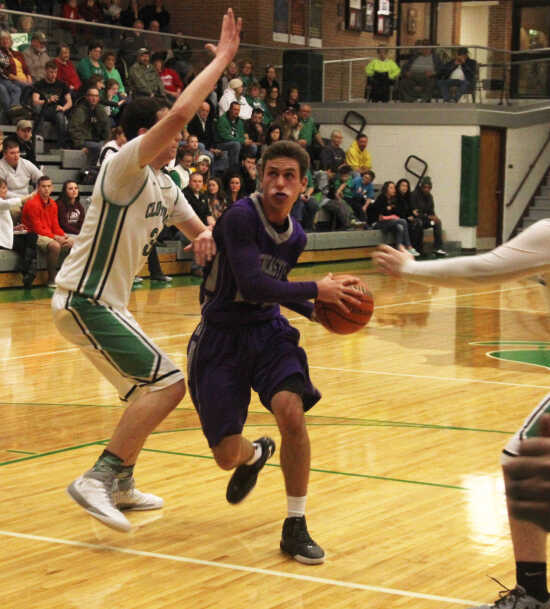 Nick Costin of Greencastle takes the ball into the paint against Cloverdale Saturday. (Banner Graphic/JAY LOCKETT)

Greencastle fell behind by 13 in the first half as Cloverdale made 11 three-point shots. Moore made five threes, including a last-second shot from near half-court as time expired in the half, Neese made four and Seth Pfaff made two.

At halftime the score was 44-31 in favor of Cloverdale and despite 15 points from Coble, GHS was still struggling to contain the Clovers.

"You've got to play 32 minutes," CHS coach Patrick Rady Jr. said. "I think they were fresher than we were at the end of the game. That is something we will take a look at and evaluate. They got to the lose balls and rebounds. They outexecuted us in the second half."

Into the third quarter Greencastle began to commit two players on Neese defensively, limiting the junior's shot attempts and the Greencastle offense picked up.

Colin York made two threes and Nick Costin added one from long distance. Coble scored 10 in the third including two foul shots. He was a perfect 12-12 from the foul line.

"I told the guys that I don't know that I've ever had a team inspire me the way they did in the second half," GHS coach Troy Greenlee said. "We came out in the second half and we played with as much intensity as we have all year and it carried over into a great win for us."

The Tiger Cubs did not let up in the fourth, nor did they lay off once they took the lead shortly into the quarter. York and Costin made two more timely threes and when Cloverdale fought back with a three from both Moore and Neese, GHS didn't panic but continued its offensive approach and never relinquished the lead in the final quarter.

"I think a lot of it is that we have to pick each other up," Coble said. "Sometimes we can put each other down and that doesn't help our effort. If you see we get into a lot of huddles after timeouts and talk about what we need to fix. That helps us a lot with our effort and communication."

Full stats will be posted when available from Maxpreps.com