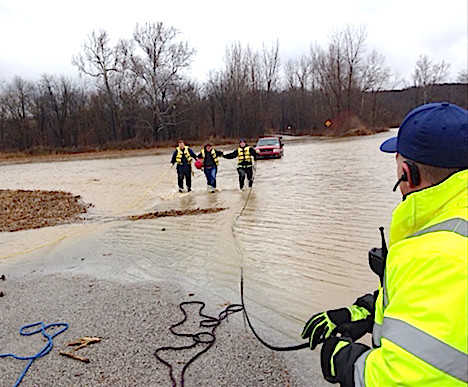 The Greencastle Fire Department, along with two officers from the Greencastle Police Department, rescue three from the floodwaters of Big Walnut Creek Sunday by the southern mouth of Crowe's Bridge. GFD firefighters Kurtis Belcher (above, left) and Brandon Watson assist the driver and children from the scene.

A mother and two small children were saved from the floodwaters south of Crowe's Bridge Sunday amid torrential downpours that lasted through the Christmas weekend.

The Greencastle Fire Department (GFD) first received notice at 2:08 p.m. and arrived at the scene in Greencastle Township at 2:15 p.m.

GFD Capt. John Shaffer said his crew, as well as two additional officers from the Greencastle Police Department, assisted the trapped occupants, saying officials cleared the scene within the hour at 3:03 p.m.

"We really want to stress that people do not attempt to drive through high water," Shaffer said, adding that awareness is crucial in times of emergency. "I'm very proud of my guys for the job they did."

The vehicle crossed Crowe's Bridge and, after attempting to navigate high water, was swept clear of the road and into the Big Walnut overflow. The vehicle stopped short of entering the creek itself, Shaffer said.

GFD initiated the rescue, using ropes and personal floatation devices to assist the victims. The occupants reportedly waited to be rescued before attempting to leave the vehicle.

No injuries or signs of hypothermia were reported.

Helmer said roads are flooded in many of the same places they often flood following heavy rainfall, near Big Walnut Creek and other waterways.

However, no declaration is needed since the problem is not county-wide as it would be in a snow or ice emergency.

"Use extreme caution because a lot of roads are under water," Helmer said.