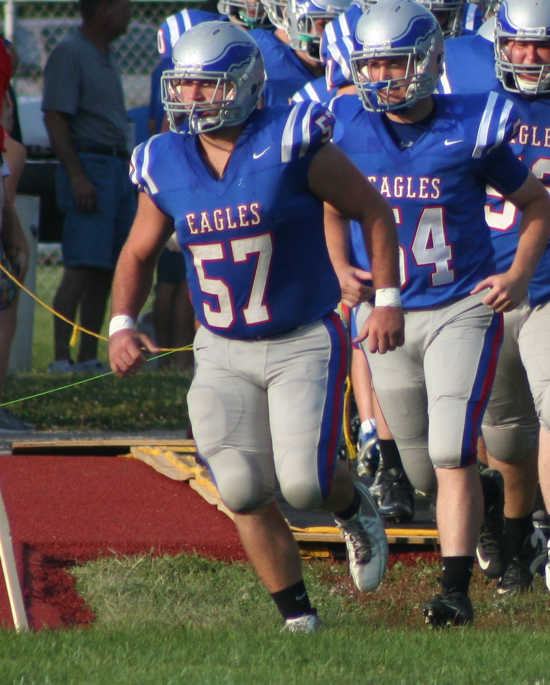 Joey Masters leads his Eagles onto the field in a game against Cloverdale. Masters has been named the Banner Graphic Offensive Player of the Year by Putnam County coaches. (Banner Graphic/NICK WILSON)

After each South Putnam game this season, Eagle fans saw their team take to the sideline and cross the field, taking it one last time before walking off. However many fans may not know the origin or what it means for the Eagle squad.

"This summer (senior Joey Masters) came to me and he had this idea for a fifth quarter," SPHS coach Nathan Aker said. "He asked me if it would be OK. We had some extra conditioning after we as a team conditioned over the summer and during practices and even on game night. We didn't have one this year, but it's kind of our way of being ready for that overtime situation. I think it's something that will stick around, and it's Joey's brainchild."

Masters has been named Putnam County's Offensive Player of the Year. 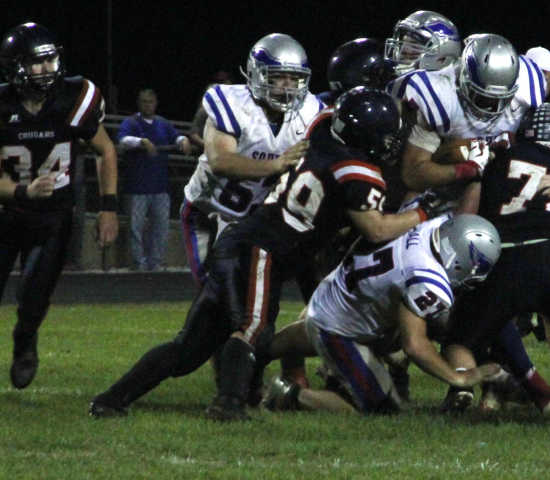 Brayden White of North Putnam earns an assisted tackle against South Putnam. White registered 95 tackles this season and has been selected as the Banner Graphic Defensive Player of the Year by the Putnam County coaches. (Banner Graphic/JAY LOCKETT)

The county has had its eyes on South Putnam's Joe Masters for quite some time. The senior has been a force on the Eagle track and field team since he was a sophomore and the same has been true for the football program.

"It's nice when one of the best athletes on the football team is also one of the hardest working guys on the football team. For the last six years, Joey has worked extremely hard. He has earned everything that he's gotten along the way. He came in as a freshman and earned a starting spot on the offensive line on a pretty big deal for freshman. He just took that responsibility and ran with it."

As an offensive linemen it won't be the stats that grab the attention of onlookers, but when it comes to Masters, the Eagles understand that a lot of those big runs by Kyle Shaffer were paved by the offensive line led by Masters. 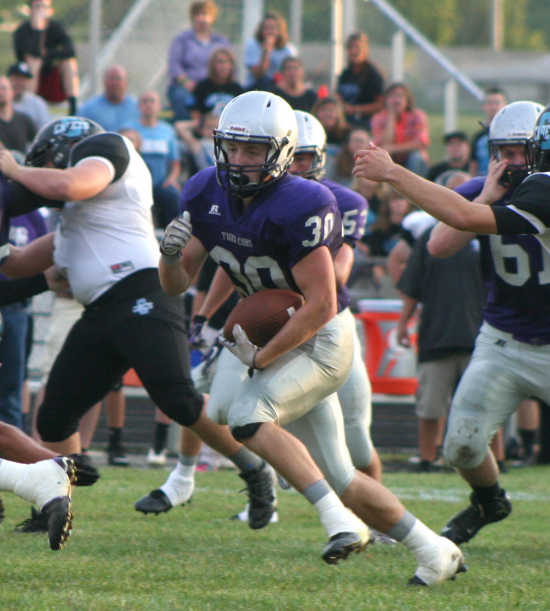 Devin Clar of Greencastle moves the ball up field against Cascade. The junior has been selected to the 2015 All-Putnam County offensive team. (Banner Graphic/NICK WILSON)

"It's neat when people recognize what we may have already known," Aker said. "It's crazy how people will gameplan for a kid like Joey Masters whether he's on offense the or defensive side. On offense you are kind of limited to one spot. We've done things over the years to move Joey around a little bit from side to side. When it's time to go we are running behind him more times then we are not. That was a big part of our offense over the last four years."

It hasn't been all offense for Masters either. His versatility on offense was coupled with a defensive tenacity that earned him a spot on Putnam County's All-Defensive team last season as well as his freshman season.

"Defensively he's just a complete gamewrecker," Aker said. "He can just take over and offensively he can do the same. His speed, his strength for a kid that size is just an incredible thing. He's someone we are really going to miss." 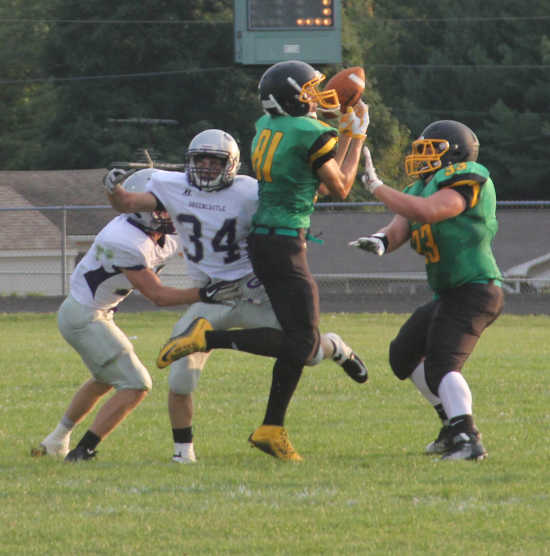 Cloverdale's Tyler Kaeft secures a catch against Greencastle. The sophomore has been selected to the All-Putnam County offensive team of 2015. (Banner Graphic/JAY LOCKETT)

North Putnam's senior Brayden White was named Defensive Player of the Year and he is no stranger to the All-County team.

White earned a spot on the defensive All-County last season and this year the senior dominated on the Cougar defense, earning 95 tackles on the season, third most in the county with 49 solos. He transferred into Cougar country for his last season and was an immediate impact.

White was a leader for the Cougars' defense during a season where North Putnam held opponents to less than a touchdown in five of their 12 games. The Cougar defense was stellar all season thanks in large part to the senior players Daniel Huffman, Bobby Scheele, Cameron McPherson and White all of whom were named to the All-WIC. Trevor Bingman also played a big part on the defense as well.

However the majority of teams had to be sure that White was accounted for when trying to move the ball for the stats do not tell the entire story for a defensive player like White.

Bailey Allen also earned a spot as the All-County kicker.

From the Eagles tackles Kody Britton and Matt Schnepp will be joining Masters on the All-County offensive line while Jimmy Rutter earned a spot for his receiving. Brandon Gierke was a versatile player for South Putnam and earned his spot at the tight end position.

Running Back Kyle Shaffer was an effective runner for the Eagles and earned a spot along with Grady McHugh, an at-large addition.

Defensively Will Cruse and Josh Bills made the All-County defensive line, while Daniel Grundlock earned the linebacker spot.

Johnathan Thibodeau earned a spot at defensive back and Dylan Wood earned the special teams slot.

Cloverdale's Parker Watts earned the All-County punter slot and his teammate Tyler Kaeff also was selected as a receiver. On defense it was Nick Winders who earned the only spot on the All-Defensive team for Cloverdale.

Offensive Player of the Year

Defensive Player of the Year