GROVELAND -- A Floyd Township home was destroyed by fire early Wednesday in a blaze being blamed on the family Christmas tree. 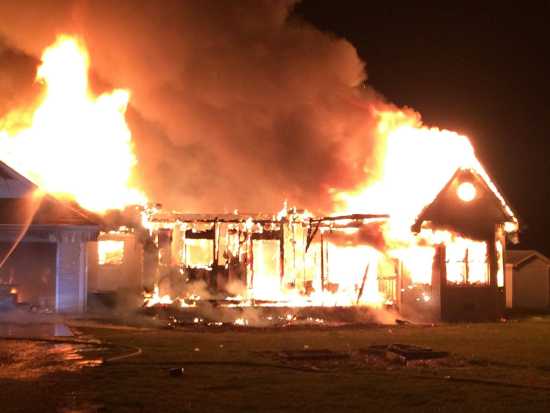 Flames engulf the Schmitz home on County Road 600 North in Floyd Township early Wednesday. The structure was considered a total loss despite the efforts of nine area fire departments that were on the scene for more than five hours.

The approximately 1,800-square-foot residence of Robert Schmitz was reportedly completely engulfed in flames at the time the call was dispatched about 11:30 p.m. Tuesday.

Floyd Township Volunteer Fire Department Chief Brian Ervin said the official cause is still under investigation but the homeowner suggested that the Christmas tree was the likely culprit.

"In speaking to the homeowner, and based on where we believe the fire originated," Chief Ervin said, "we believe the cause may have been from the Christmas tree.

"The homeowner said the tree had not been watered in a couple of days and the Christmas lights were still powered on," Ervin added.

Schmitz was busy working inside pole barn on his property in the 6800 block of E. CR 600 North -- about a mile west of the Heritage Lake Subdivision -- when fire broke out.

He reportedly came out of the barn to find the house on fire, uncertain how long the structure might have been on fire prior to discovery.

Upon arrival of the first engine, the house was too engulfed in flames to make an interior attack, fire officials said, setting up a defensive posture for firefighters.

The house was considered a total loss, Chief Ervin said. No injuries were reported.

The State Fire Marshal's Office was scheduled to send an investigator to the Putnam County scene Wednesday, Ervin said.

The last unit left the scene around 4:45 a.m. Wednesday.