On Tuesday, Jan. 5, President Barack Obama addressed the nation and an audience of shooting victims to unveil his measures on gun reform. He surprised all and moved some with his tears, but it's his policies that are receiving the most attention.

For Putnam County residents, the question is: How will these changes affect me?

Everyone seems to know that internet sites and gun shows will be required to have licenses and conduct background checks. The New York Times reported that this was not an expansion, but rather a clarification of the existing law that gun owners are not "hobbyists" or "collectors" who were originally exempt if they frequently sell guns. 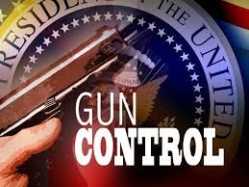 Bryan Ciyou, who has been the general counsel for the Indy 500 Gun and Knife Show for 15 years and has written nine books on gun law, said "the notion of a gun-show loophole is a complete myth" and the real issue is wanton internet sales. Current gun laws require all new guns and any purchase online be shipped to a registered gun dealer, which Phil Parker, chief deputy of the Putnam County Sheriff's Department, said is intended to close that loophole.

But Jerrod Baugh, owner of the Guardian Firearms Academy and police officer of 21 years, admitted that there are no means of preventing buyers and sellers from shipping to themselves.

"There's always that possible criminal element," Baugh said. "You can go to a doctor for oxytocin, or you can go to the streets. I think we need increased law enforcement and prosecution."

Hiring 200 more agents for the Bureau of Alcohol, Tobacco, Firearms and Explosives (ATF) is also part of Obama's plans. The hope is that these extra hands will process applications faster, making the process smoother for law-abiding gun owners, and enforce existing laws. The New York Times also reported that the ATF will spend $4 million to enhance its database that links guns to violent crimes.

Obama also mentioned preventing criminals from purchasing weapons under the guise of National Firearms Act (NFA) trusts and other entities who are currently permitted to buy firearms. But Ciyou says that Regulation-41P is an existing law already intended for that purpose.

But Ciyou, who says he is apolitical, also had good things to say about Obama's measures.

"A lot of presidents have talked about this issue, except now we're talking about more of the root of the problem," Ciyou said, citing what he considers to be mental health issues and "gross errors" in the National Instant Background Check System (NICS).

"Otherwise, we're talking about a problem that's already in decline," he said, referring to the FBI Uniform Crime Report.

The report was also referrenced by President Obama during CNN's "Guns in America" town hall event on Thursday, Jan. 7, and shows that violent crime -- murder, non-negligent manslaughter, rape, robbery and aggravated assault -- has decreased by 16 percent since 2005.

An update to the NICS system, Ciyou said, might include creating a system in which all states are able and required to report information. Under the current system, NICS gives states the choice to use their system or maintain one for themselves. The system is easily manipulated and technolgically outdated, sometimes requiring legal gun owners to get UPINs so they can conduct purchases when the computer fails to properly update, Ciyou said.

An update Obama certainly mentioned was "to ensure that federal mental health records are submitted to the background check system and remove barriers that prevent states from reporting relevant information." The New York Times reported that this means Social Security mental-illness records will be linked to background-check data, and the Department of Health and Human Services is clarifying that this linkage would be consistent with current health privacy regulations.

Another of Obama's measures was "expanding" treatment access for the mentally ill, for which he has asked Congress for $500 million. He did not prove that those who want treatment currently struggle to get it or how he would expand access, but this particular measure has been met with praise from many.

"Anytime they talk about working on mental health issues," Baugh said, "I think it's fantastic. I'm glad to hear (Obama is) doing that. I think sometimes we have more people problems than anything. If we do anything there, that is money well-spent. When you study these active shooting events, there are patterns."

In addition to the mentally ill, Obama said he plans to work with domestic abuse advocates to ensure that these victims are not also victims of gun violence. The last time the FBI issued a report on domestic abuse, in 1995, "personal weapons" (hands, feet, etc.) were the most common weapon, although firearms were often used in murder cases, which accounted for 0.21 percent of cases.

Chief Deputy Parker said that, in domestic abuse cases, there are already systems in place that take guns out of the hands of domestic abuse perpetrators.

"If you hold a permit and become involved in a situation where law enforcement feels that you are no longer a responsible weapon owner, " Parker said, "we notify Indiana State Police. They have a hearing on it. The person is called in; the police officer is called in; testimony is exchanged like a court hearing and they will revoke a handgun license."

Another of Obama's measures includes requiring gun dealers to report stolen and missing firearms in a timely manner. The current requirement is three to five days, although it can be longer if weekends are involved, Ciyou said. Chief Deputy Parker noted that enforcing this change may be difficult, since dealers are the ones doing the reporting. Still, Baugh believes that the American public has nothing to fear from most dealers, saying the National Organization of Dealers has made teaching dealers how to spot straw purchases -- when one person buys for another -- a priority.

Finally, Obama plans to work with private companies to improve gun safety. He mentioned using fingerprint technology so that only the owner could use the gun, placing in tracking devices on guns and child-proofing triggers.

"It could have a positive side because many police officers get killed by their own weapons," Chief Deputy Parker said. "As a police officer for over 30 years, I would be very uncomfortable if my weapon was tied to a fingerprint. I've got milliseconds to protect my life or someone else's, and I'm depending on a piece of technology. Guns are mechanical devices; there's all kinds of things (that can go wrong), so you add one more thing to that."

He went on to say that this technology could drive up the price of a weapon and make it more inaccessible to someone. For Baugh, who has been teaching responsible gun ownership and handling for four years, says these technologies would be "only as good as the user."

"You can still shoot yourself. I think training, like past presidents have done, is good. I don't see too many guns laying around killing people."

The National Safety Council reported that of all accidental deaths, firearms were the least common, accounting for 530 deaths in 2013, while poisoning was the most common at nearly 40,000. Even homicides with firearms have decreased by 40 percent since Congress passed the Brady Handgun Violence Prevention Act, which required licensed dealers to perform background checks, in 1993. But, for some, there is still more to be done.

"Let's not take guns away," Adam Cohen, Putnam County Chair of the Indiana Democratic Party, said, "but let's admit that we need to do something. Let's fund research on how to prevent gun violence. We are a very violent society compared to the rest of the world. My understanding is that America is one of the most heavily armed nations in the world. To be safe I need to carry a gun? It goes back to the days of lawlessness. I think we're a little more advanced than that."

While others feel that maybe we're not, sadly, as far along as we should be.

"A long time ago," Chief Deputy Parker said, "I had an altercation with a guy and my weapon was the one being wrestled over. And some guy, a citizen, stopped and helped me. He was armed. I was happy to see him, I can tell you."

Either way you see it, one thing's for certain:

"Until you talk non-emotionally about this issue," Ciyou said, "you'll never resolve the root causes."