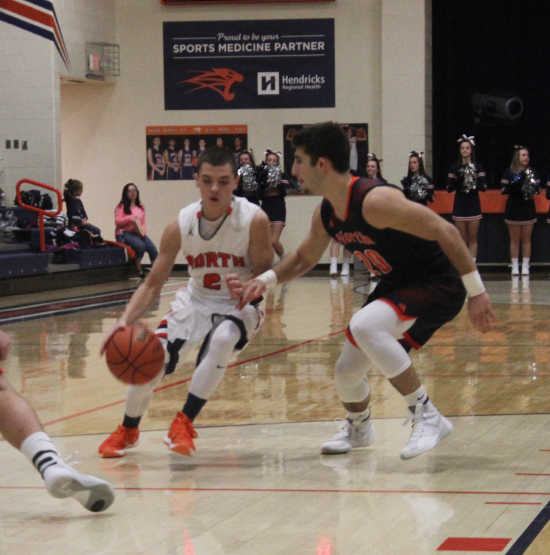 Treyton Smith fight into the post in a game earlier this season. Smith scored 12 in Friday's game. (Banner Graphic/JAY LOCKETT)

The Cougars hit just 1-11 from the field in the first quarter and finished shooting just 27 percent (14-51) for the game. The Cougars fell to 3-9 on the season.

"We had some open looks in the first quarter and didn't hit them. We shot way too many three's and didn't attack the basket like we should," North Putnam head coach Collin McCartt said.

Although the Cougars were ice cold in the first quarter, the Warriors couldn't capitalize. Turkey Run had its own problems shooting. The Warriors hit just 1-of-9 in the first stanza. The Cougars led at the end of the quarter by a score of 4-3. That 4-3 edge would be the last time the Cougars would have the lead in the game.

Turkey Run found its offensive rhythm in the second quarter. The Warriors shot a blistering 8-of-10 from the field. They used dribble penetration to set up numerous layups and Brock Mitchell knocked down a pair of three-pointers as they doubled the Cougars' scoring output (18-9) in the second quarter to take a 21-13 halftime lead.

"In the first quarter, I thought our zone was very good. Then we stopped being active in it. A lot of that was our frustration due to our shooting woes," McCartt said.

The Cougars wouldn't allow the Warriors to pull away. North managed to stay within striking distance during the third quarter. Treyton Smith scored six of his team-high 12 points in the stanza. Turkey Run maintained its lead by going to the boards in the quarter. The Warriors pulled down nine rebounds in the quarter including four offensive rebounds and extended their lead to 32-22 heading into the final quarter.

"I thought our guys fought hard to the end. They (Turkey Run) are a very hard team to guard. They spread you out and drive the ball so well. That was a situation I didn't want to get into, but they got the lead," McCartt said.

North Putnam had its chances in the final period. The Cougars battled back to cut the lead to four at 39-35 with just under a minute to play, but couldn't get any closer as the Warriors closed out the game hitting 10-of-13 free throws in the final quarter. The Cougars had a couple of chances to cut the lead to a one-possession game, but couldn't convert.

"We had a chance to cut it to three (points) with under two minutes to go, but couldn't get it done. Credit Turkey Run, they hit their free throws down the stretch. We missed some easy shots, if we just hit a couple of them it's a different ballgame. We might have been able to stay in our zone and play like we want to," McCartt said.

North Putnam was led in scoring by Smith with 12 points and Preston Porter added 11 for the Cougars. Turkey Run's Tyler Davis led all scorers with 17 points and Jake Ferguson supported him with 12 for the Warriors.

North Putnam will travel to North Vermillion tonight (Saturday) for another non-conference game.