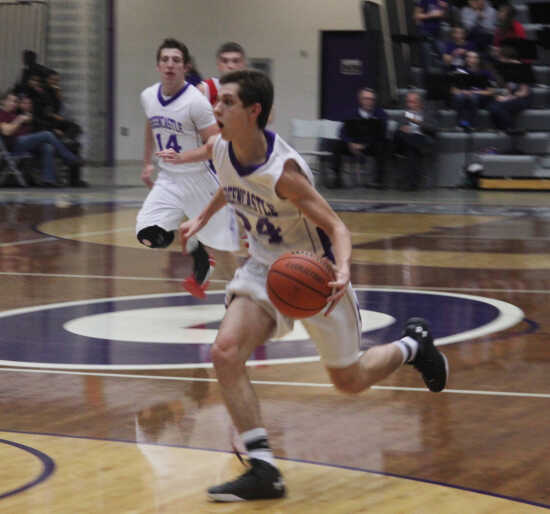 GREENCASTLE -- Northview went shot-for-shot with the Greencastle for much of the evening before several late miscues allowed the Tiger Cubs to put the finishing touches on a 67-62 Western Indiana Conference Western Division win Friday evening.

Greencastle senior Ryan Coble came into the game as the state's fourth-leading scorer at 26 points per contest and he did a bit better than that with a 33-point, nine-rebound effort. He scored nine of those points in the fourth quarter, including a pair of go-ahead free throws with 34 seconds left. A Northview turnover led to a pair of free throws by Collin York. Another Knights' miscue led to a bucket by Coble to seal the victory.

"We put ourselves in a position to get back into the game and I think we left a little bit out there at the end," Northview coach Clint Weddle said.

Weddle was complementary of the Tiger Cubs' effort on both ends of the court and noted that Greencastle is far from a one-player show.

"What (Greencastle) does with their players is very impressive. They have two very good offensive players and they have four or five guys that flat get after it," Weddle said of the Tiger Cubs. "They've got guys that go to the glass, guys that are willing to screen, guys that want to defend and you've got ot have that. Not everybody on your team is going to score points."

The Knights were hitting plenty of shots in the first half as Dylan Hyatt and Braydon Tucker combined for 21 of Northview's 32 points before intermission. Hyatt's jumper at the buzzer got the Knights within 33-32 heading to the second half.

Greencastle would use a 9-0 run in the third period to open a 44-37 gap off a 3-pointer by Coble. Drew Lumsdon scored inside for the Knights, but Coble answered in transition. Kalen Schane corralled a loose ball for a score by the Knights, but York finished the period with a jumper and a 48-41 lead by Greencastle.

Northview clawed back as Lumsdon hit a 3-pointer and Hyatt added a floater in the lane. Tucker knocked home a pair of free throws. A 3-pointer by Hyatt got Northview even at 35-all with 6:07 left. Moments later a second 3-pointer gave the Knights a brief lead before Nick Costin tied the game with a 3-pointer of his own for the Tiger Cubs. Quinton Hayes followed suit for the Knights with a long range shot as Northview led 57-54 before Coble took over down the stretch.

A pair of free throws by the senior preceded a jumper from J.T. Matthews. A 3-pointer by Coble put the Tiger Cubs ahead by four points. Northview went back on top with a tip-in by Tucker, but the Tiger Cubs would score the final six points of the game.

"We're not anywhere as focused as I would have thought we were," Weddle noted. "I don't think we were versus Edgewood and I don't think we were (against Greencastle). All I can say about that is that it comes back to coaching staff's shoulders. It means we need to do a better job of setting up our practices and making sure we get whatever game plan across to our players. We just haven't carried into the game as far as the last two times we have been out there."

The Knights got 20 points from Hyatt and 10 from Lumsdon.

Weddle was also impressed with Coble's effort across the board.

"Coble is as fine a guard as far as being able to create laterally and plays very well defensively as well," Weddle said of the senior Tiger Cub. "You have to stretch yourself pretty far to find a kid that can do the things that he can do especially as far as passing is concerned too."

The Knights fall to 5-5 overall and host Owen Valley at 6 p.m. this evening.