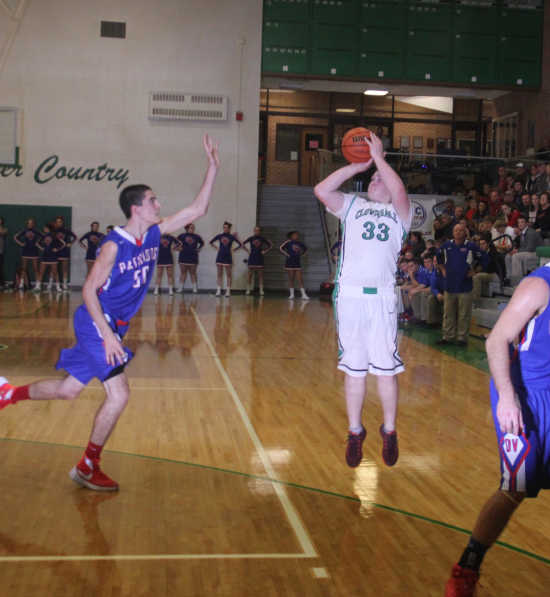 CLOVERDALE -- The Cloverdale gym was packed on a night when retired CHS boys' basketball coach Pat Rady was presented with a banner honoring the Hall of Fame coach that now hangs in the Cloverdale gym. The Cloverdale boys earned the win with dramatic play in front of the packed house, beating WIC Eastern Division rival Owen Valley 69-59 Friday.

Cloverdale's Cooper Neese was struggling with his long-range shot early and went scoreless in the first quarter. Owen Valley contributed a lot of effort stopping Neese and Jalen Moore, which allowed Moore to be able to find open shooters when the defense clamped down.

Twice in the first he found Seth Pfaff open in the corner for a three. Nick Winders also nailed one from long distance and from inside, helping the Clovers to a 13-11 first-quarter lead after being down 6-3 early. 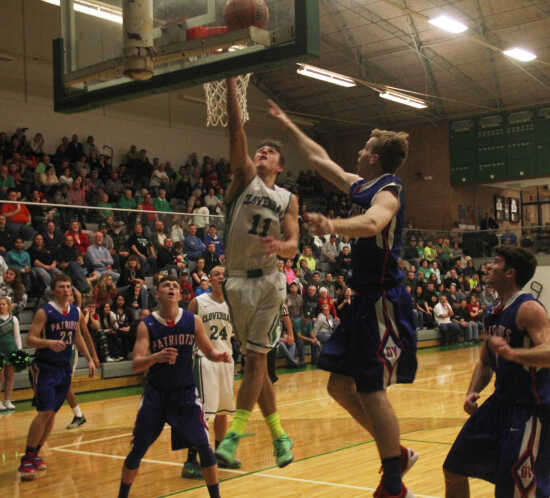 "We do it in practice," Clover coach Patrick Rady Jr. said. "We're not a two-man team. We've got guys that can step up and that can play. It was great to them be confident and aggressive. I thought Seth, Nick and I thought Jake Wilkes came in and really gave us energy off the bench. Each person it may be different. It's been Brenan (Hall) and its been Robert (Nally). Different guys will step up."

In the second Neese and Moore began to make it to the foul line. CHS went 5-6 in the second quarter from the line and that contributed to the 20-17 lead. Pfaff continued his consistent effort as the Patriots continued to pressure Cloverdale with physical play at the rim. He scored five points, including a three just before the half.

"I felt like it was us really coming together and a team," Pfaff said. "If we would not have stuck together we could've just fell apart at the end. They were only down by a little so I felt like that was important." 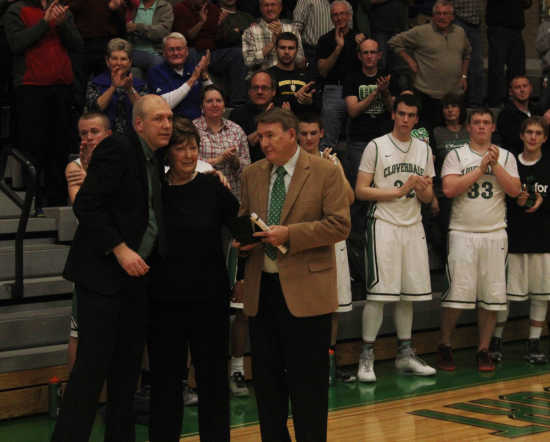 CHS coach Patrick Rady hugs Margaret and Pat Rady during halftime Friday. Rady was presented with gifts from Cloverdale and a banner to hang in the Clover gym. (Banner Graphic/JAY LOCKETT)

Defensively CHS pressure the ball up and down the court, limiting the amount of touches that Owen Valley's team captain was able to get.

"We obviously had to contain (Cam) King," Rady said. "He is an outstanding player. He is one of the best players in the conference. So obviously that was important. He is so good at driving and kicking to other players that he's very hard to guard. I thought they went to the offensive glass. They are a tough team to match up with. They have a lot of strength in rebounding and they can put it on the floor.

"I thought in the first half we did a good job of containing for the most part. Then I thought we started gambling a little on defense and over extending. They took advantage of that. Against good teams you cannot over-extend. You have to protect the paint area." 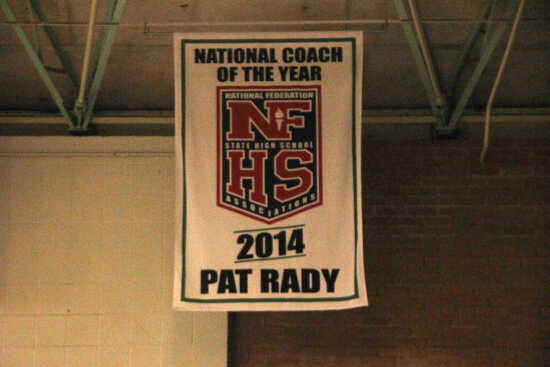 The match got more physical as the game drew longer. CHS began to go the glass harder and the Clovers also continued their efforts to get into the lane. The three ball still wasn't falling for Neese who went 0-11 from downtown. However, the Clovers scored 12 in the third, matching the Owen Valley offense, all from inside the arc. Moore, Wilkes and Pfaff each scored four points.

In the fourth the Clovers were rewarded for their more physical play as they shot 16 foul shots in the final quarter making 13.

Moore had four assists but many of his passes led to Cloverdale points. Moore also netted an acrobatic up and under to give Cloverdale a 47-42 lead. When the Pats fought back, Pfaff nailed his fourth three of the night. Owen Valley did not fold however and managed to tie the game at 51 with 3:30 left before Neese took to the lane and earned two points while Moore was on the bench with four fouls.

The Clovers had the Pats in the penalty and took it from there. CHS went on an 18-8 run to end the game and earn the victory.

"I don't we can look too far out," Rady said. "You have to take it one game at a time. We take it one practice at a time. When you have that mindset it's easier. If you start looking at the big picture then with one loss or one win you can get too high on it. That can catapult you into long stretches where you can struggle. Our kids came out this week after a disappointing (Wabash Valley) Classic, put that behind them and had a great week of practice."

CHS' next match will be Saturday at Banker's Life Fieldhouse in Indianapolis against Covenant Christian with a 2 p.m. start.

"We're really excited," Pfaff said. "We really are. But we really just want to go there and play our game and not get caught up in it and just have a good time."