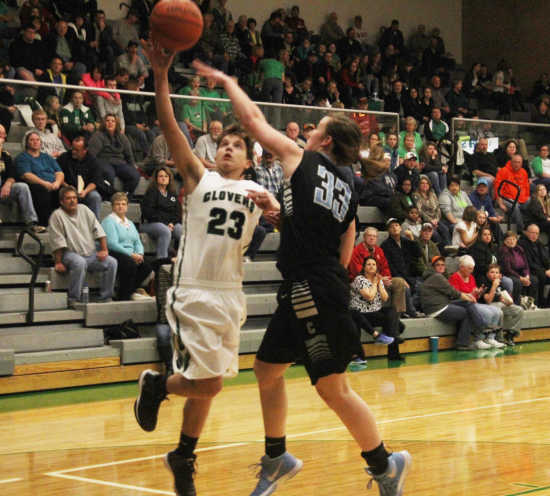 CLOVERDALE -- The Cloverdale girls' team had a tough time against WIC Eastern Division rival Cascade who used long-range shooting Friday to take the win against CHS 56-40.

"A couple of things right off the bat that just were off tonight," Clover coach Matt Langdon said. "It just seemed like everything that could go wrong. Give credit to Cascade they do that to you sometimes."

CHS only netted six in the first quarter and just eight in the second, including a half-court shot that Tori Combs banked in as time expired.

"They go for a lot of things and play aggressive," Langdon said. "They give you some things on the back side but you have to be crisp with the passes and the dribble to take advantage of that."

Cloverdale was not a team to just roll over and at certain times in the second half the Lady Clovers seemed poised to make a run and cut into the lead.

"We just continued to fight back," Langdon said. "Especially against a Cascade team that can put so much pressure on you that teams seem to go the other way. Our girls have a lot of fight in them. It is disappointing to have so much not go your way early and find yourself only losing by 12. You look back and you're disappointed in missing that opportunity to knock off a good Cascade team."

Haley Hamm was the main threat offensively for CHS, knocking down all nine of her points in the third.

Cloverdale then won the fourth 15-14 behind some aggressive play which led to eight made foul shots. Payton Dorsett and Lauren Meek began to attack the basket more aggressive, which led to some openings on the floor. But the damage was done and CHS could not catch up.

"We'll move forward," Langdon said. " We had some unconventional lineups tonight. Cascade played with four guards on the floor, some times five guards. We had to match that up and didn't get to utilize some of our bigs like we usually do. But we'll go back to the board and see how we can enforce our game, that inside-outside game, and maybe not have to adapt to the other team so much."