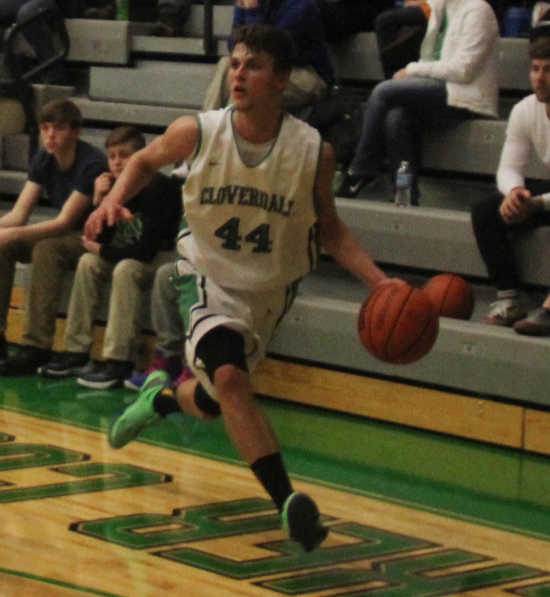 The victory Friday keeps CHS in second place in the division behind Edgewood who beat Owen Valley the same night.

Cloverdale started a little slow offensively and used a half-court zone to try and force the Cadets into making errors. Jalen Moore and Seth Pfaff made two from long range to get the Clovers started and Nick Wilkes made two jumpers in the first quarter, one off a no-look pass through the paint from Moore. 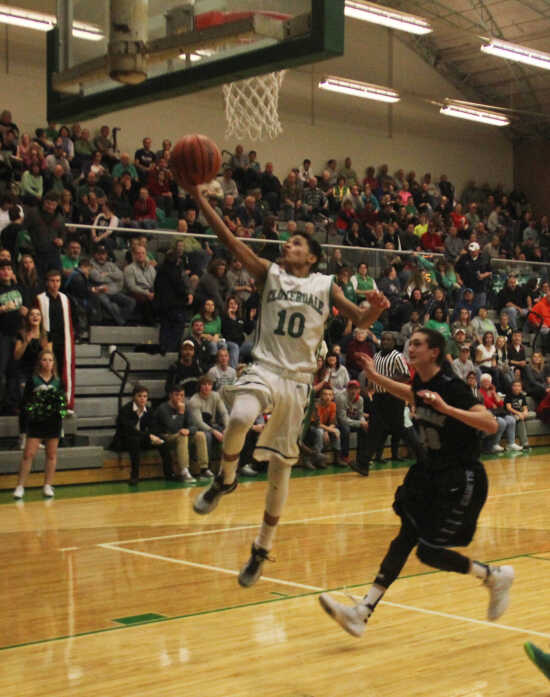 Jalen Moore takes to the rim after a Cloverdale steal. (Banner Graphic/JAY LOCKETT)

Cooper Neese, who was wearing No. 44 in honor of the late former Butler University center Andrew Smith, made a bucket and knocked down two more shots in the second quarter for seven points at the half.

Nick Winders came to life in the second, knocking down two shots, one from long range. But Cascade stuck with Cloverdale, scoring 11 in both of the first two quarters while CHS scored 12 in both.

"Give credit to them they were a good team for the first three and a half quarters," Neese said. "We weren't expecting a team like that. They played well defensively and kept it patient when they got the ball. They got the shots that they wanted. It kinda spread us out trying to guard them man-to-man, which we need to work on."

Into the second half Cloverdale switched up the defensive strategy, opting for a full-court zone in order to combat the patience of the Cadets.

"I thought mixing up the defense and our ability to play defense for 84 feet," CHS coach Pat Rady. "I thought we were able to mix up our zone defenses well. We brought chaos back."

Neese grabbed four steals on the night and they all led to buckets on the offensive end. Twice Neese pulled up after the steal to nail one from long range. He scored 10 of his 33 points in the third.

"We were able to keep the ball out of the middle," Rady "We got a couple of 10-second calls. I thought we got them to rush a little bit. They were so patient against our half-court defense that we wanted to get them into the speed that we wanted to play."

The change of pace worked for the Clovers as they won the third 15-10 and the 39-32 lead only grew from there.

"We always want to try and use chaos defense," Neese said. "In our last practice, we probably played the defense in practice that we've ever played. The funny thing is coach would say, 'You're running a killer if you don't do this.' We would do it so we wouldn't run the killer. We've got to have that mentality like we had in practice all the time. It's chaos all the time."

The fourth quarter was all CHS as Moore picked up eight of his 14 points in the finale and Neese put up 16 points with three threes as the Clovers scored 25 to the Cadet eight.

Neese represented the No. 44 well, grabbing 12 boards to complete the double-double.

"Andrew (Smith) means something special to me," Neese said of Smith, who died Tuesday after a two-year battle with cancer. "It's kind of hard to say something without tearing up. He and (wife) Sam have been very close friends. It'll be special to go to Butler (Saturday). I bought my own ticket to watch the dedication."