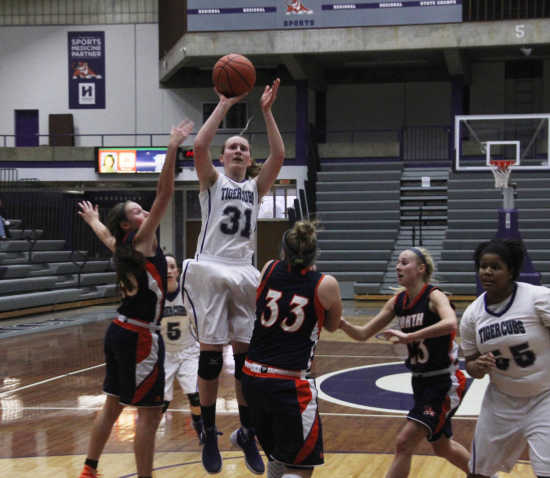 Allison White of Greencastle (31) puts up two points in the paint off an assist from Paige Bragg. White had 11 points Saturday. (Banner Graphic/JAY LOCKETT)

The Greencastle girls' basketball team saw a strong North Montgomery team Saturday afternoon but that didn't stop the Lady Tiger Cubs from picking up their 16th win of the season in a 46-39 contest.

The 16-3 record is the most wins that GHS coach Bradley Key has earned in his seven-year career at Greencastle.

"We felt like we hadn't played a strong game really since mid-December," Key said. "We wanted to go out a play hard for four quarters. I thought tonight we played hard for four quarters and in the second half of the game we did a lot better job being methodical and trying to find good shots."

Greencastle actually found itself down at halftime 23-21 despite a tough effort from Mia Stevens, who grabbed seven first-half rebounds and scored eight of her 11 points in the first half.

Bethanie Burgeson was also hot in the first half, knocking down two threes in the first quarter and another one in the second.

But the Tiger Cub defense in the second half is what put the most pressure on Chargers as the full-court zone led to mistakes by North Montgomery.

"I thought they did a great job working together," Key said. "That's what you want to see going into the (WIC) crossover game. You want to be playing your best ball now at the end of January going into sectional. If we play defense like that, win or lose it's something we can be proud of."

The defense did the job for GHS in the third as the Lady Tiger Cubs allowed only six points in the third and the physical game was tied going into the fourth at 29.

"We really make it a point to not let up," GHS' Paige Bragg said. "We have four games left and we've been playing really well right now. We're 16-3 and we know why. It's because of our defense, because we work hard and because we work well togerther. So us seniors and coach are emphasizing don't let up. Remember why we got to this point and stick it out for the rest of the season."

Greencastle received the message from the seniors and five players scored in the fourth, including Bragg who scored all nine of her points in the final quarter after the pressure defense allowed for easy buckets on the Tiger Cub end. GHS won the fourth 17-10.

"Overall I though it was a pretty solid game tonight," Key said. "I thought my seniors played outstanding. I thought Paige Bragg did a good job of keeping her head in the game. In years past she may have hung her head but she kept plugging away and plugging away. She wanted her team to win.