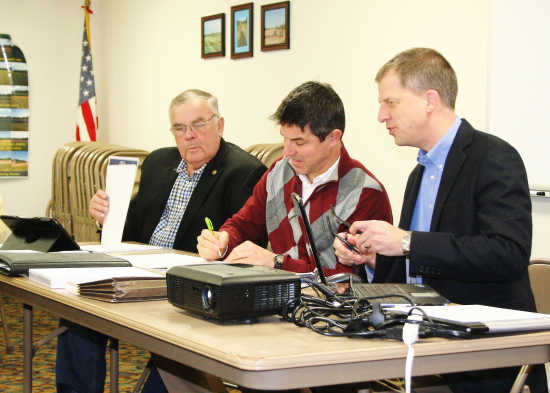 All kinds of crazy critters and characters are comically employed these days as major insurance companies hope to get otherwise serious points across.

The Aflac dynasty relies on the duck as its hook. Geico first tried cavemen, and then saw the light and settled on the little green gecko. Fastidious Flo still turns Progressive into an oxymoron all its own, while All-State has gone from good hands to Mayhem. And of course, there's Jake ... from State Farm ... wearing khakis.

All in the name of marketing. And all in good fun.

But it's a serious, more personal approach that District 24 State Sen. Pete Miller (R-Brownsburg) and Greencastle insurance agent Mike Murphy are taking as they try to modify an old Indiana insurance law.

During the ongoing session of the Indiana General Assembly, Miller has introduced Senate Bill 40, which aims to increase the financial responsibility requirements that apply to motor vehicle registration for liability arising out of the ownership, maintenance or use of a motor vehicle.

Speaking at the recent Legislative Update session in Greencastle, Murphy explained that state minimum coverage for bodily injury and damage or destruction of property during an accident has gone unchanged for 49 years.

Miller explained that the bill comes from a constituent who was rear-ended by a driver with minimum liability insurance and had to end up paying the difference in costs incurred by an accident that was not his fault.

Murphy knows that feeling as well after a driver with state minimum insurance crashed into his office on North College Avenue last May.

"I'm lucky I wasn't seriously injured or killed," said Murphy who was sitting at his desk in the corner office when the brakes failed on a pickup truck that hit the building and brought the walls and bookcases down all around him, causing damage estimated at $50,000-$60,000 at the time.

"I still have flashbacks to this day," Murphy said.

Of course, increasing liability minimums would come at an increased cost for insurance consumers. Murphy, however, said it would only amount to $8 per vehicle per month to increase from minimum coverage to something more practical for the world of 2016.

"It's a no-brainer we need to increase these limits," Murphy said in support of Miller's proposed legislation. "I don't think anybody in this room would disagree.

"Ethically it's the right thing to do. I think we would all agree that these state minimum limits are long overdue for additional coverage."

Murphy also cautioned the group that some 30 percent of drivers out on the highways today are operating vehicles without any insurance coverage.

"I see a lot of claims come across my desk involving drivers with no insurance," he added.

Senate Bill 40 is currently assigned to the Insurance and Financial Institutions Committee with a hearing scheduled for Thursday at the statehouse in Indianapolis.

But the unusual discussion which saw Murphy even utilize the Farm Bureau office white board to drive home points relative to Miller's bill, wasn't lost on veteran County Councilman Darrel Thomas of Greencastle.

"I've been coming to these things for a number of years," he said of the first Legislative Update program of 2016, "and this is the first time we've had a discussion about car insurance."