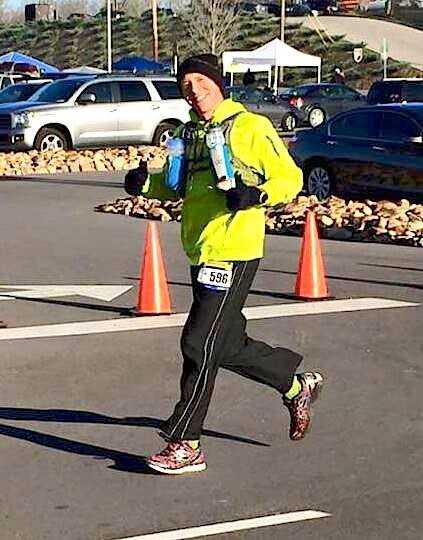 When local runner Michael Scott entered the month of December, he didn't know what the cover of Runner's World magazine would show.

Entering a contest to be featured on the journal's cover, Scott was the bout's front-runner for most of 2015, gaining nearly 40,000 online votes by August alone.

However, Bobby Gill and Michelle Hercules Walker, both from Brooklyn, N.Y., edged Scott at the last second for the cover, which was accompanied by air time on NBC's "Today."

Michael Scott's children (a.k.a. "pacers") cheer him on lap after lap during the Pistol 100 Mile Ultra in Alcoa, Tenn. Scott placed second in his age group and eighth overall. (Courtesy photo)

Scott, who regularly participates in marathons that sometimes stretch to 100 miles, took the news in stride as he was faced the Pistol 100 Mile Ultra on Jan. 2.

Out of 1,600 entries, Scott charged his way into becoming a top-10 finalist (a category which focused on five men and five women), as chosen by Runner's World Editor-in-Chief David Willey.

"We went looking for two awesome runners to appear on the December cover of Runner's World," Willey's press release read. "What we uncovered were thousands of inspiring stories -- how lives were saved, altered or made whole by running.

"There are no losers here."

Although Scott didn't make the cover, he was still featured within the magazine itself via a Streaker Profile by writer Megan Hetzel.

Asked what initially inspired him to begin running, Scott said "I run because I love the sport."

"I run because I love the feeling of running -- I run to inspire others to get out the door and get healthy," Scott said. "At 42 years old, it has made me a stronger, healthier person. I'm in the best shape of my life all because I decided to get up off of the couch one day and make a change."

"I had a 1,140-day running streak," Scott said. "After the bombings in Boston, I felt that was my next goal. To run Boston, I would have to take 40 minutes off my marathon time, and that's exactly what I did."

Scott went on to add that he has lost 60 pounds since 2011 and reached his goal of running in the Boston Marathon in April of last year.

"Running has changed my life considerably ... I am a much healthier and happier person (and) I've met some incredible friends along the way," Scott said. "I've helped others start running as well and (I'm) finding the joy it brings."

Scott not only runs in these seemingly impossible marathons, he's also taken to coaching others who want to do the same.

"I have become a running coach and I've also helped others accomplish their goals (by) helping them improve their running," Scott said. "I get a joy out of seeing my athletes succeed and improve. It has also brought my family closer together as we all like to run."

Scott most recently participated in the Pistol 100-Mile Ultra marathon earlier this month in Alcoa, Tenn., coming in second place for his age group and eighth overall.

Scott now plans to participate in the upcoming Indiana 100 on April 30.