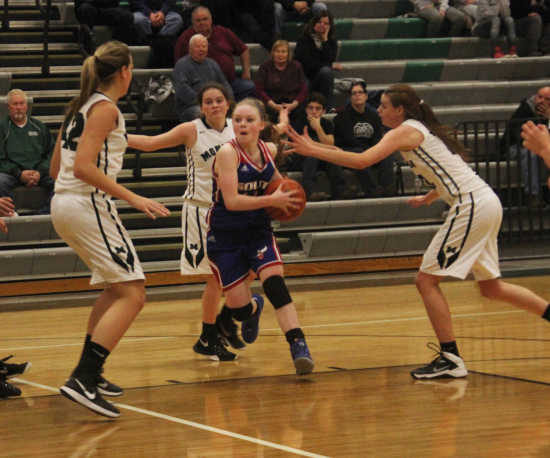 After a tough double-digit loss Friday night, the South Putnam girls' basketball team fought off a hungry Monrovia team to win 50-48 in a battle that came down to fourth-quarter free throws.

South Putnam got off to a good start, knocking down three threes in the first. Lillie Stein took two assists from teammates and knocked in a couple and Miranda Bieghler added another. Maddie McHugh added two points to round out the 13-7 Eagle quarter.

"We were going to come back and do what we do," Eagle coach Brian Gardner said. "That's defending and making everything uncomfortable for them. They've bought in all year but tonight it was a great game for our kids."

Monrovia fought back in the second quarter and made steady inroads as the Eagles fought to hold onto the lead.

South Putnam began looking for openings inside as Monrovia started to chase shooters off the three-point line. Stein scored two more buckets from inside the arc, Katie Hewitt earned a bucket and two free throws and Jessica Modglin got on the board for the Eagles.

South Putnam managed to hold a 23-21 lead at halftime but shortly into the third Monrovia took the lead. The Bulldogs netted 13 points to the Lady Eagle seven in the third and South Putnam had to fight from 34-30 going into the fourth.

"They started to hit a few shots," Gardner said. "We kept our composure and we got a couple of shots to go. But even when they hit those shots we continued to defend and do the same things we did in the first, but they made a couple shots and made their little run. Every game you are going to have that."

Once again for the Eagles, the physicality picked up into the second half, Maddie McHugh went down with an injury to her back during a rebound attempt but she was back by the end of the fourth.

South Putnam fought its way back into the lead with foul shooting, defense and a drive to get into the lane against Monrovia's tall defenders. Seven Eagles picked up a steal with Bieghler earning two and on offense it was Bieghler who constantly fought to the line and made foul shots, trimming the lead a bit every time South Putnam got the ball.

Bieghler hit eight straight free throws in the fourth, interrupted only by her two fourth-quarter three-pointers. Hewitt also added three foul shots and a bucket to score 20 points in the fourth to the Bulldog 14.

Once the Eagles took the 47-45 lead they didn't give it back despite the best efforts of Monrovia. The Eagles move to 10-9 and face Cascade (10-8) on Tuesday before a rematch with Cloverdale (10-10) on Thursday.