On Monday, Feb. 8, the four-member Core Ensemble will visit DePauw University to present its chamber music theater work, "Of Ebony Embers -- Vignettes of the Harlem Renaissance." 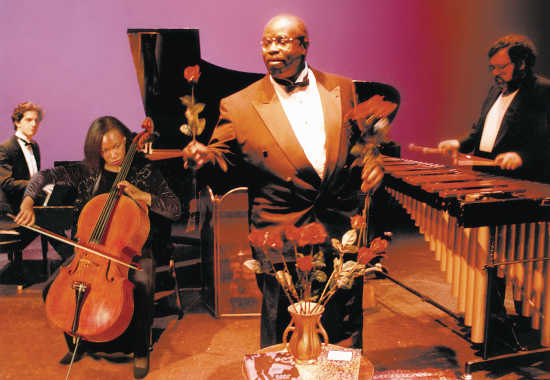 The Core Ensemble will give a free performance on Monday, Feb. 8 in celebration of Black History Month. "Of Ebony Embers -- Vignettes of the Harlem Renaissance" begins at 7:30 p.m. in Thompson Recital Hall on the DePauw University campus.

The program, presented as part of Black History Month, begins at 7:30 p.m. in the Green Center's Thompson Recital Hall.

Chamber music theater, a unique format developed by the Core Ensemble, features a marriage of theatrical narrative to chamber music performance. One of several original works in the group's repertoire, "Of Ebony Embers," written by Akin Babatunde, explores the lives of African American artists who shaped the Harlem Renaissance through using historical figures as a dynamic way of celebrating diversity.

Actor Dracyn Blount brings the period to life through his multi-character portrayals of the great American poets Langston Hughes, Countée Cullen and Claude McKay as seen through the eyes of painter and muralist Aaron Douglas, described by art historian David Driskell as the "Father of Black American Art."

Since 1993, the Core Ensemble has toured to every region of the United States and internationally to Australia, England, Russia, Ukraine and the British Virgin Islands.

The visiting ensemble receives support from the National Endowment for the Arts, the State of Florida, Department of State, Division of Cultural Affairs, The Palm Beach County Cultural Council and the Aaron Copland Fund for Music.

No tickets are needed for Monday's free performance.

For additional information, visit the DePauw School of Music's new website at music.depauw.edu.