A 27-year-old Greencastle man, charged with arson in the fire that destroyed a South Arlington Street apartment late Saturday night, made his initial appearance in court Wednesday afternoon.

Saying only a few words during a brief appearance before Superior Court Judge Denny Bridges, Timothy J. Hubble had a preliminary not-guilty plea entered for him in the case. 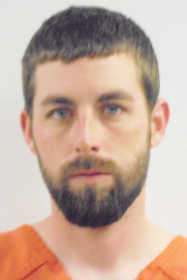 While no motive was actually revealed during the brief court appearance, a probable cause affidavit filed in the case indicates Hubble wanted to scare his estranged wife and former mother-in-law by setting a couple of boxes piled under the outside stairway on fire.

Hubble, who was arrested Tuesday afternoon and lodged in the Putnam County Jail, is facing a Level 4 felony charge of arson, which carries a sentencing range of 2-12 years in prison and a fine of up to $10,000.

The two women escaped out a back door after the staircase to the main entrance was engulfed in fire that authorities say was intentionally set by Hubble.

Investigator Josh Kreigh of the Indiana State Fire Marshal's Office has ruled it an arson fire.

During the initial hearing, Judge Bridges asked Hubble if he knew John Black, who owns the apartment structure and resides in the 601 Anderson St. home at the end of the block.

"No, sir," Hubble responded as he sat alone without legal counsel at the defense table.

He also told the judge his only prior criminal offenses were alcohol-related issues.

Judge Bridges then informed Hubble that a no-contact order is in place, preventing him from being in contact with either Beth Clodfelter or her daughter, Shienisty Hubble, the suspect's estranged wife.

The judge also issued another order, prohibiting Hubble from trespassing on the property where the incident occurred.

The fire was reported at 11:05 p.m. after Clodfelter and Hurst reported hearing something hit the door or stairway, and when they looked outside, the entry was in flames. Fire quickly spread to the upper area of the structure and the roof.

Authorities are uncertain what the women actually heard, but their reaction to that sound may have saved their lives. Flames soon engulfed the entire upper story that houses the apartment that rests above a two-car garage.

Greencastle City Police Det. Michael Collins was called to the scene around midnight and soon learned from GPD Assistant Chief Brian Hopkins that the building owner had surveillance cameras mounted on the outside of his house.

Collins viewed video from four cameras, all showing the suspect coming or going up the driveway on the west side of the property, followed by video showing several sparks from under the stairs as the suspect reportedly used a lighter to start the blaze, and then the fire taking off. The suspect is also picked up on video walking by a light in the driveway and leaving the property on foot southbound toward Anderson Street.

Both Clodfelter and Hubble's estranged wife were called to police headquarters to view the video, and were "shocked and surprised" to identify Hubble on it, Collins noted in the probable cause affidavit.

Det. Collins then brought in Hubble to talk about the case, listening to an ill-conceived alibi before advising the suspect that authorities had him on video setting the fire.

Asked why he did it, Hubble told investigators he "just wanted to light a few of the boxes under the stairs on fire" in an effort to scare his former wife and mother-in-law.

His ex-wife was not in the apartment at the time, nor was their son.

"Tim advised he didn't think it would burn down the house," GPD Det. Collins added in the court document filed Wednesday.

Damage to the structure has been estimated by fire officials at $60,000.