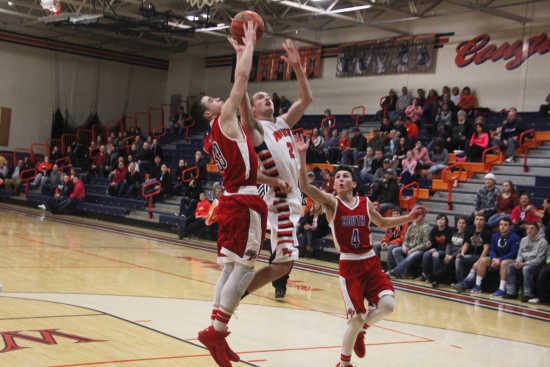 ROACHDALE--A productive third quarter for the visiting South Putnam boys' basketball team was not enough to earn the win against North Putnam, which turned up the defensive pressure in the final quarter and earned the win 59-47.

This game was a rematch of the Jan. 29 WIC meeting when North Putnam took a convincing 56-37 win.

The Cougars were hot early with all five of their starters getting in on the scoring action. Preston Porter and Treyton Smith each knocked down a three and the Eagles found themselves down 17-7 late in the first.

"We got off to a good start, but I really didn't feel like we had a lot of energy. "Cougar coach Colin McCartt said. "We hit a couple of shots but we weren't able to keep our foot on their throat." 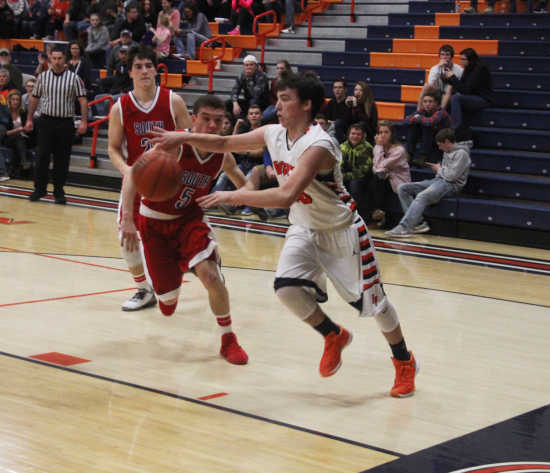 South Putnam struggled against the full-court Cougar defense early but got into a groove as the first quarter ended and was down 17-12 after one.

South Putnam outscored North Putnam 13-7 in the second quarter, when the Eagles began crashing the boards and fighting for the tough inside shots. Grady McHugh was the main rebounding threat for SPHS and he tied with Jimmy Rutter for the most Eagle boards with 5.

"We went to a few things that worked in the second quarter, but that was when we started really breaking down defensively," McCartt said. "They got some good looks and they got a good drive and kick for a three right there at the end of the second quarter to take the lead."

After Thomas Fanning's three to give the Eagles a 25-24 lead, the Eagles used the third quarter to piggy-back off the momentum created in the second. Plunkett came to life scoring four from the field and three at the line, but it was Rutter who scored 13 in the quarter to lead South Putnam to a 47-37 lead into the fourth.

"Third quarter was some of the best basketball we've played all year," Eagle coach Greg Dean said. "I thought we were really patient. We moved the ball well. We were disciplined and we didn't settle for anything other than good shots."

Down 10, the Cougars picked up their defense and used a combination of good full-court defense and crisp offense to pick up points any way they could.

"Before the quarter, coach kind of challenged us to step up, to quit getting split on defense, to talk more and communicate and quit being lazy," Kyler Jeter said.

North Putnam got the message and they held South Putnam scoreless in the fourth. The Cougars went 11-15 from the line and hit five shots from the floor to score 22. Porter added his third three of the night while Treyton Smith scored five of his game-high 17 points from the line.

"We just decided we were going to defend finally," McCartt said. "We didn't stay in front of anybody in the third and they kept going to stuff that was working for them. Jordan Bean came in and did a really good job against Plunkett. We got stops and we didn't treat our offensive possessions like we had to get all 10 back in one."

Once North Putnam got the score to within six, McCartt said the Cougars began to smell the "blood in the water" and NPHS has now won three games in a row.

"This game was good," Jeter said. "It kept the streak alive. We've got a game this Saturday (at South Vermillion). We'll have to prepare a little different for it. Then we'll have a whole week to prepare for South Putnam again."

While North Putnam will play the Wildcats on Saturday at 2:30 p.m., The Eagles will host Clay City on Tuesday before its third meeting with the Cougars this season.