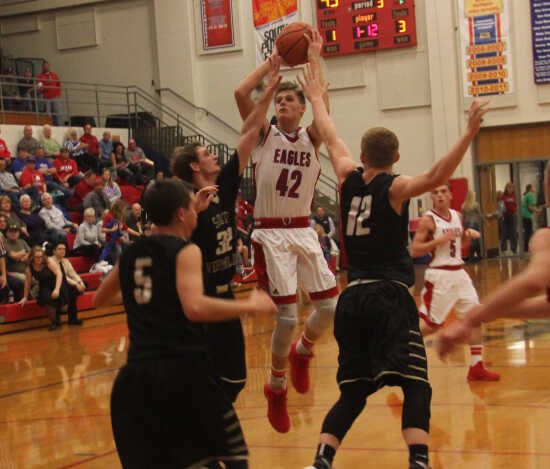 Clay City used a hot first quarter to establish a lead and managed to hold on while the Eagles chipped away. The Eels rained three pointers on the Eagles in the first quarter, building a 16-9 lead. Noah Denker buried three from downtown to lead the way for Clay City.

"It helps when you can get off to a good start like that. Noah Denker came out and hit some threes early. One from real deep, maybe Cloverdale. He is like another coach on the floor for us," Clay City head coach Vance Edmondson said.

The Eels hit six-of-nine field goals in the first quarter led by Denker's nine points. Josh Stewart kept the Eagles in the game in the first stanza, scoring five of his 10 points.

"Early we gave up some threes. Mostly to the Denker kid. He is a really good player," South Putnam coach Greg Dean said.

The two squads played evenly throughout the second quarter, but the half ended as Brenan Walker buried another three for the Eels at the buzzer to give Clay City a 28-17 halftime lead.

"We really battled tonight. Everyone that got in there worked their tail off tonight," Dean said.

South Putnam took control in the third quarter. The Eagles outscored Clay City 13-2 in the period to rally and tie the game at 30 apiece going into the fourth quarter. The Eagle defense really stiffened in that third period. They held the Eels to 1-of-6 from the floor and had scoring contributions from five players in the quarter.

"Coach Dean had the boys ready to play tonight. They did a good job of taking away what we wanted to do and we had some shots that didn't fall," Edmondson said.

The Eagles played efficiently on offense in the quarter, with only one turnover and hitting 5-of-10 from the floor.

"Offensively, we were patient and tried to get the right kind of shots. We only turned the ball over 11 times tonight and five were against their press. We did a better job of that tonight," Dean said.

Clay City began to pull away in the fourth quarter, mostly by going the charity stripe and knocking down free throws. The Eels hit 10-of-14 from the line in the quarter to keep the Eagles from finishing their rally.

Allen Plunket kept the Eagles alive scoring nine of his game-high 19 points in the quarter.

"I thought we stepped up when we had to and hit some free throws later in the game," Edmondson said.

The Eagles struggled against the Clay City press, but wouldn't let the Eels extend their lead by much as the Eagles stayed tough on defense and pounded the boards. SPHS outrebounded the Eels 23 to 19 on the night.

"I thought we did a lot of good things defensively throughout the night. I thought Josh Stewart played really well and with good position," Dean said.

Denker led Clay City with 18 points and Walker added 12. Plunkett's 19 led all scorers and Stewart added 10 for the Eagles.

Clay City will travel to North Central on Friday night, while the Eagles head into the Putnam County Classic on Friday against North Putnam.