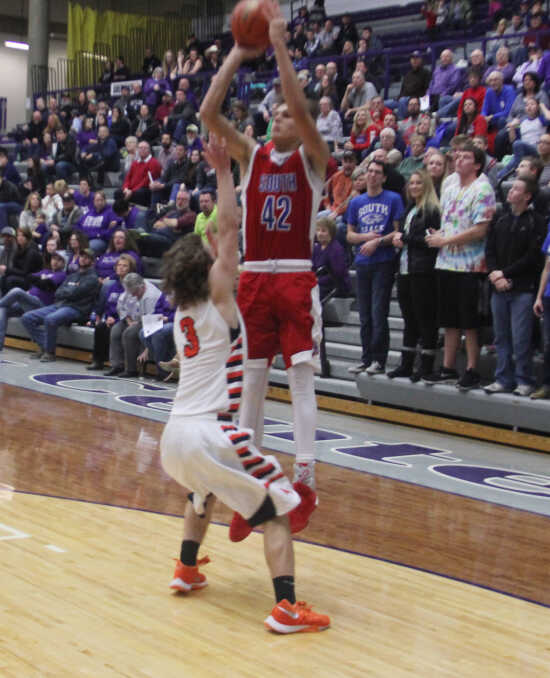 South Putnam's Allen Plunkett knocks down a game-winning jumper for earning the Eagles a place in the county championship game. (Banner Graphic/JAY LOCKETT)

The South Putnam and North Putnam boys' basketball teams game into the Putnam County Tournament Friday night very familiar with each other, having played twice in the last month for two North Putnam wins. It's no wonder that the first game in the tourney came down to the last shot with South Putnam earning its third win of the season.

"We've been getting better and better at putting four quarters together," Greg Dean. "We kept our heads up and we kept battling. We kept grinding. Any time North Putnam made a run at us we found a way to bounce back."

There were plenty of runs in the game and momentum was up for grabs at any point. The first quarter was a feeling out process with North Putnam knocking down six-of-seven free throws and South Putnam hitting two threes and a two from the floor.

Senior Kyler Jeter was a big part of the Cougar offense early, making a shot from the floor, a three and two foul shots.

"I thought they outworked us for a lot of the game," Cougar coach Colin McCartt said. "I felt like we came out really flat in the first have. We let Plunkett get some easy looks and he knocked those down."

The Cougars went into the second half up 11-9, but South Putnam took the lead before halftime behind some balanced Eagle scoring.

"I feel like we had nine or 10 guys that all contributed tonight," Dean said. "Josh Stewart did a good job of really leading us on the defensive end. Allen (Plunkett) and Jimmy (Rutter) offensively were really good. They were aggressive. I'm really proud of the way Grady McHugh came in and rebounded the ball. Coming off the bench he gave us a spark."

The Eagles continued their momentum after a 23-31 halftime lead Plunkett hit his third three of the night and Rutter made two from the floor. North Putnam scored just six in the third via a three by Preston Porter and Duke Duff but went 0-5 from the foul line.

South Putnam led 34-27 at the start of the fourth but the Cougars were determined to fight back into the match.

"Obviously the way we competed in the fourth quarter was good," McCartt said. "The main things went wrong for us and we had a shot to win it there in the end. But we lost the game way before that."

Duff came alive, nailing three from long range in scoring nine of the 11 Cougar points. While defense was key for both teams in the fourth the game-deciding play was an offensive one set up by Dean after a timeout.

"We drew something up and we ran it pretty true to form," Dean said. "Allen had an option of going left or right there. He went left and knocked down the big jumper. We know he's got the ability to do that. I thought that last minute of play, we did a really good job of handling the basketball and the pressure, knowing the situation. We got the ball inbounded with 16 seconds. The kids got into the set and they executed."

Plunkett's shot left four seconds for the Cougars, who made it down the court, but the off-balance shot was off target.