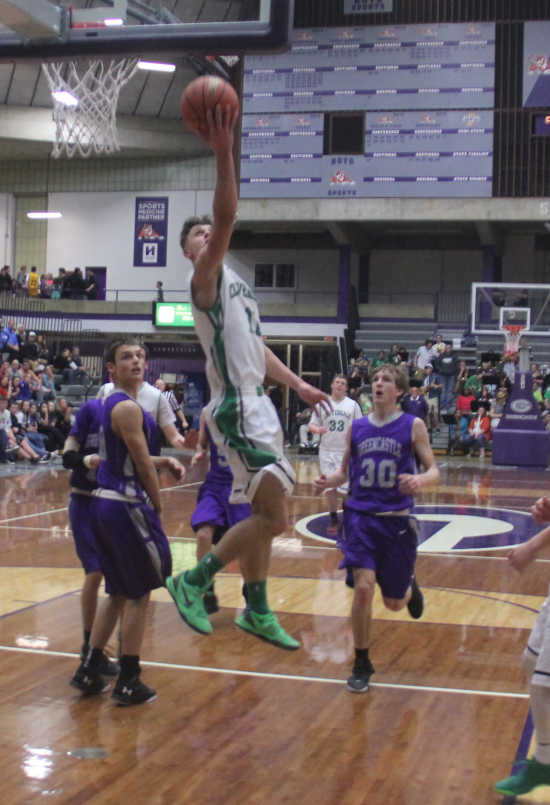 Cooper Neese of Cloverdale lays in the reverse layup in the county tournament. CHS will play South Putnam in the championship round Saturday. (Banner Graphic/JAY LOCKETT)

The nightcap of the Putnam County Classic semifinals was a match-up of high-scoring teams and guards as the Cloverdale Clovers and junior Cooper Neese took on senior Ryan Coble and the Greencastle Tigers Cubs. The Clovers advanced to the title game by winning 75-71 in overtime.

"This was one both teams wanted to win and both teams played hard," CHS coach Patrick Rady said. "Both schools can be proud of their kids and if we played 10 times we would be 5-5, we are just that even."

Neese came into the game averaging 29.0 points a game, good for third in the state while Coble was one spot behind him, averaging 27.9 a game. Both players can take over the game and the game came down to which player performed better in the clutch.

Coble got off to a hot start trying to sweep the Clovers in the season series and scored 11 points in the first quarter. The Tiger Cubs defeated the Clovers on Dec. 19 at Cloverdale 75-67.

Neese was going to do his best to not let that happen as he got off to a fast start as well scoring 14 points and hauling in seven rebounds in the first half en route to giving his team a 28-25 edge.

Both defenses on the night were very good, holding each other under their scoring averages while forcing multiple air balls and bad shot selections.

Cloverdale played a full-court press and then fell back into its zone set. This helped stop Greencastle from penetrating into the lane and made GHS settle for long shots.

Greencastle played man-to-man for the entirety of the game. With Neese and sophomore Jalen Moore who both can penetrate into the lane Greencastle chose to guard them straight up which worked decently well.

The game was a good one as neither team could gain momentum and they traded punches back and forth. With four minutes left in the game the teams started to trade buckets and gained a one-point lead every time they made a basket.

Coble went to the line with 40 seconds left in the game down one and missed the free throw to tie it but junior Nick Costin grabbed the offensive rebound and called a timeout giving the Tiger Cubs the ball with 35 seconds left down one, 53-52.

Coble got fouled after Moore slipped going to the basket and made one free throw to tie the game with 7.8 seconds. Neese grabbed the rebound and flew down the court but missed the layup as time ran out to send it to overtime, tied at 53.

Both teams scored three points quickly in overtime but then Cloverdale went on a 7-0 run to take a 63-56 lead with five points by Moore and a layup by sophomore Nick Winders. Coble then hit two free throws to make the score 63-58.

After Moore went down and hit two free throws of his own, Coble rebounded a missed shot and passed off to York who then hit a corner 3-pointer to cut the deficit to 65-61. That looked to be the end of it as the Clovers hit four free throws in a row to stretch the lead to 69-61 with 35 seconds remaining.

Coble made a basket and got fouled sending him to the line, he missed the and-one but the Tiger Cubs got the offensive rebound and got tied up giving them the ball. Off the inbound pass by York, freshman Alex Costin drilled a 3-pointer to cut the lead to 69-66.

"When Ryan took the ball to the basket tonight he was very hard to guard," Greenlee said.

Cloverdale would make two more sets of free throws to gain a 73-66 advantage before Coble rebounded his own miss and put it back in to make the score 73-68 with nine seconds left.

All Greencastle could do is foul and Moore went to the line, made both and sealed the Clovers' spot in the championship game.

Coble finished the game with 38 points, 17 rebounds and eight assists. Coble did all he could to fight his team into the final game.

"He is an outstanding player," Rady said. "He is so unselfish and that is the scary part because you really want to help but he will give it up. He is so good off the bounce."

Neese played as good as advertised as well going for 27 points, grabbing in 14 rebounds and dishing out five assists.

The Clovers will face the South Putnam Eagles whom they have beaten earlier this year but those were different teams as each have improved vastly since the last time they met.

"They have a few outstanding players and they have been playing well as of late," Rady said. "On a given night you never know in this game so we have to be ready to play 32 minutes."

The Tiger Cubs will face off with the North Putnam Cougars who in this recent run should not be taken lightly.

The third-place game will be at 6 p.m. tonight while the championship will be at 7:30 p.m.