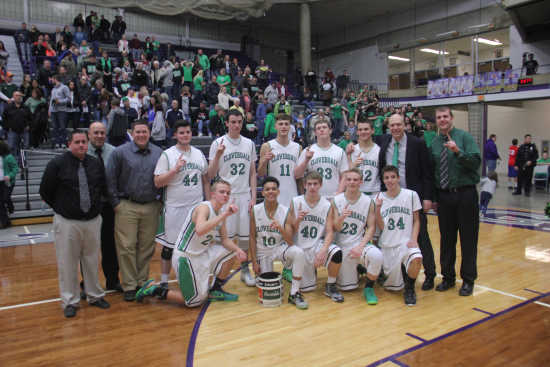 After the overtime victory Friday against the hosts at McAnally, the Cloverdale boys' basketball team came out firing in the championship round against South Putnam who also was coming off a dramatic victory from Friday.

CHS got the upper hand Saturday and never trailed in the contest winning 71-42 and earning the Putnam County Pride Bucket for the first time this season.

"It's the first time as a sophomore," Jalen Moore said. "I want to keep it going in the next two years. It feels great. It's a good experience especially in this championship game. Getting past that first round is good experience. It feels awesome."

The Clovers went up 10-0 to start the game and it was clear early that CHS had come to play. Cloverdale got looks inside and out and the Eagles were down 22-7 after one quarter.

"It's not hard to get up for a game like this because its County Championship. It's a bucket game," Eagle coach Greg Dean said. "Every game is a rivalry game. I thought our kids were ready to play. We just came out a little flatter than we hoped. We didn't rebound well in the first half."

South Putnam fought back into the second as Allen Plunkett came to life and scored a three, a two and two foul shots coupled with Dalton Scotts first two buckets.

Cloverdale, however, managed to increase its lead with Seth Pfaff scoring his only thre points, Wilkes adding two of his eight and Cooper Neese scoring six more.

CHS coach Patrick Rady Jr. was very clear on what it took to win a Putnam County Tournament and was happy to his team earn the win after coming close in tournaments in the past.

"It takes 64 minutes of basketball," Rady said. "In a championship game you've got to be ready to go from the tip. I thought that was very important. That's a testament to the kids. They were really ready to go in pregame. They were loose.

Leading 37-18 at the start of the third Cloverdale had to contend with an Eagle team that had its best quarter. Plunkett scored a three early leading him to a 10-point quarter. The Eagles scored 16 in the quarter but couldn't draw any closer as the Clovers also scored 16 with 14 coming from Neese.

"The kids did a good job of battling back, getting the score to 12 (points behind)," Dean said. "Cooper just had an unbelievable game. It's hard to fight that when he's hitting shots from all over the floor."

The Cloverdale defense stifled the Eagles in the fourth, only allowing eight points. Plunkett and Scott hit a bucket with Stewart adding a three. Cloverdale did not take its foot off the gas early as Neese made four more threes in the fourth, just pulling up at the top of the key.

Neese scored 40 points with eight rebounds and five assists. Moore had 15 for CHS.

"It's unbelievable, senior year and going out like this," CHS senior Brenan Hall said. "It was a great team win. It's not over but it's going to be hard to beat this feeling."

"It feels really good," Nally said. "It's been a long journey but we've finally came together and it's starting to feel more like a family now. It's big."

The Eagles will host three of the next four games with Eminence (4-15) making the trip to South Putnam (3-15) Tuesday.