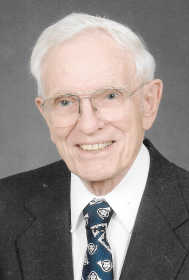 He was born on Feb. 6, 1927 in Tulsa, Okla., the son of the late Merle and Dolly Alice Wright. The family moved to Onarga, Ill., where he graduated high school, leaving the following day for two years of service with the U. S. Navy based in California.

After the service he attended DePauw University, class of 1950, where he was a member of the Men's Hall Association and a Phi Beta Kappa member.

While at DePauw, he met his future bride, Elizabeth Henry Wright, and the couple married on June 16, 1951.

Shortly after marriage the couple moved to Champaign, Ill., where Jack earned a master's degree from the University of Illinois while working at the University Testing Bureau.

After earning his advanced degree, Jack returned to DePauw University, retiring after 38 years with the Testing and Research Bureau. From 1966-68, the Wrights and their children lived in Kabul, Afghanistan, where he worked for the Columbia Teacher's College Team to set up a testing and research bureau for incoming Afghan students to the University of Kabul.

In 1973 he served as the director of studies for 32 DePauw students during a semester of study in Vienna, Austria, and Budapest, Hungary.

He was actively involved in the Greencastle community, serving as an assistant Boy Scout Troop Leader and as a member of the Civil War Roundtable. He sang in the DePauw Festival and Gobin United Methodist Church choirs, the latter for more than 40 years.

Jack is survived by his wife and two children Rick (Kathy) of Springfield and Cindy of Greencastle. He was preceded in death by his parents, two older brothers and an infant daughter.

Visitation for Jack will be Friday, Feb. 19 from 4-8 p.m., at the Bittles and Hurt Funeral Home. Funeral services will be held on Saturday, Feb. 20 at 10:30 a.m. at Gobin United Methodist Church, 307 Simpson St., Greencastle.

In lieu of flowers, the family requests memorial contributions be made in Jack's honor to Gobin United Methodist Church.