A full house can be rather claustrophobic. 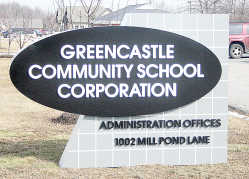 That's the lesson the Greencastle School Corporation has been learning for the last seven months, but liberation has come as school officials can finally breathe easy and expand into the rest of the new administration offices located at 1002 Mill Pond Lane, the former HOP building.

The building, located directly across Percy Julian Drive from Greencastle Middle School, was built in 2004 and had shared occupancy until GCSC purchased it in mid-2015. Since that time, GCSC shared the building with mutiple vendors, including an AT&T office that dominated the front and interior design of the building.

Officials of GCSC, Superintendent Dawn Puckett said, have been separated and located in different buildings around town since 2010 when former Superintendent Dr. Bob Green created an efficiency plan for the corporation that would save money over time.

Green's plan included the closure of the old Miller School building, which had housed all of the corporation's administrative functions.

In its place, the administrative staff was spread over four locations in three buildings.

However, things have turned around, Puckett said, and the traveling has become cumbersome.

"Our core -- finances, personnel, assistant superintendent and superintendent -- were located within the kindergarten wing at Ridpath Elementary where we took up four classrooms," Puckett said. "We remained there until just this last summer. Needless to say, having us take up four classrooms really crowded them and kept them from providing their services easily.

"Plus, we had our special education departments at Tzouanakis, our food services at the high school and our technology department was in the library at Ridpath," Puckett added.

"We were spread out all over the place."

One problem the board dealt with was a recently-renewed contract by AT&T with then-owner Tim Gierke to occupy the building until 2020. However, GCSC was able to buy out AT&T's contract and take full occupancy by January of this year.

In fact, the school board had its first regularly-scheduled public session in the new building on Tuesday.

For more information about the new administration offices, call the Greencastle School Corporation at 653-6840.