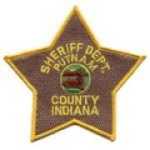 A Madison Township woman who suffered multiple gunshot wounds late Wednesday night remains in an Indianapolis hospital but her condition is at the point that Putnam County Sheriff's Department detectives hope to speak with her on Friday.

Jerrell Sosbe, 62, of rural Greencastle, was shot in the torso three times in a family dispute at their home in the 8000 block of County Road 300 South.

Sosbe's husband Paul and adult son Kristian were also involved in the incident, although detectives remain unclear on the exact events of the night.

Detectives were dispatched to the scene at 11:35 p.m. Wednesday to investigate the shooting.

PCSD Detective Sgt. Pat McFadden said investigators have a statement from Paul Sosbe, but need to talk to Jerrell Sosbe as well to get a more complete picture of the events.

"There's another half of this story to get and until we have that, we're wide open on this case," McFadden said.

Jerrell Sosbe remains in Methodist Hospital recovering from her injuries. McFadden said on Friday morning that he hoped to speak with her later in the day.

The Indiana State Police crime scene investigation unit is also taking part in the inquiry, and McFadden said he is waiting for the official report from ISP.

With those facts and the two statements, McFadden said, he will have a clearer idea of what happened.

Following the shooting, Jerrell Sosbe was airlifted from the scene.

Kristian Sosbe fled the scene but was located about an hour later in a nearby shed.

On an order from Putnam Circuit Court Judge Matt Headley, Kristian was taken to the Hamilton Center in Terre Haute for evaluation.

The Putnam County Prosecutor's Office is also involved in the case and awaiting the findings of investigators.

No charges have been filed in the case and no one has been arrested. It remains unclear if there was any criminal activity involved.