After 20 years, there's a new face on the local economic development franchise.

Her introduction as the successor to Bill Dory, the newly elected mayor of Greencastle, came at the outset of the Development Center's annual luncheon meeting at the Area 30 Career Center on Greencastle's East Side. 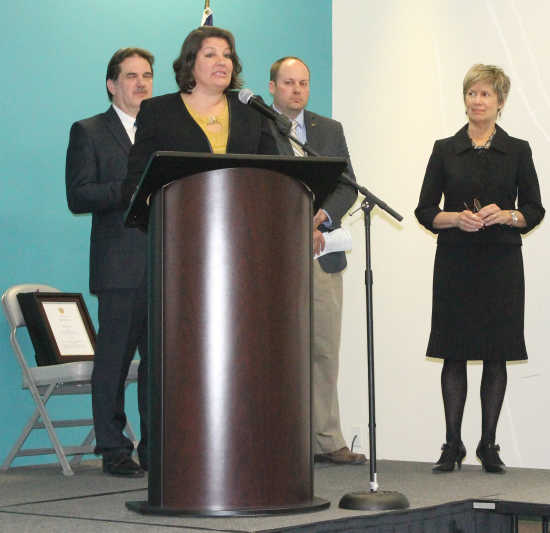 In other words, Clary will have mighty big shoes to fill. And she knows that quite well.

Clary said she has known Dory for several years, first in her capacity as Parke County Redevelopment Commission executive director, a position she held for 10 years prior to her three years as executive director of Indiana West Advantage (formerly the Montgomery County Economic Development Corp.).

During her early days in Parke County, she was advised that if she ever had a question, Bill Dory would probably have the answer.

"Boy, were they right," she said of the advice to seek out Dory for answers.

Looking around the Area 30 community room, Clary was pleased to note the diversity among those in attendance and how that should facilitate a collaborative community effort moving forward.

She believes "collaboration is imperative to any successful economic development initiative," and looks forward to working with the community to continue Greencastle and Putnam County's successful development plan.

Originally from Valparaiso, Clary graduated from Taylor University with a B.A. in accounting. She served as a state auditor for seven years with the State Board of Accounts before taking the Parke County Redevelopment Commission position in Rockville, and then moving to the Crawfordsville post in 2013.

While in Montgomery County, Clary began a microloan program through a USDA grant and worked with the City of Crawfordsville on its successful 2015 Stellar Communities application.

Clary also was instrumental in advancing other key economic development initiatives such as the expansions of several manufacturing companies.

Among those Crawfordsville expansions was the growth of Penguin Random House from 300 employees to more than 900. That came with a merger of two companies, Random House and Penguin Publishing, as they consolidated four U.S. distribution facilities into two.

Ultimately Penguin Random House chose Crawfordsville as its second location partly due to relationships built by Clary, as well as an aggressive incentive package.

Dory, meanwhile, stressed that the community has "been so fortunate" to have had "great leadership" in Greencastle and Putnam County in recent years.

"As many of you know," he said, "this (economic development) is a team sport, and we've got a great team."

So after 20 years, Dory's location may have changed from the Putnam County Partnership Center to Greencastle City Hall, but his ultimate mission has not.

"It's been a good run," he told the Development Center luncheon audience. "I'm looking forward to continuing to serve our communities."

The Development Center also presented a plaque to former Mayor Sue Murray, who was one of four retiring board members. The others are Ralph Cunha of Endeavor Communication, Beth Flint of the Greencastle Chamber of Commerce and Jinsie Bingham of the Greencastle City Council.

Elected to the board for a new one-year term was Greg Cook, Ivy Tech, along with the renewals of Rick Burger, Duke Energy; Laura Elsbrock, Area 30; Gary Lemon, DePauw University; and Greg Linton, Cloverdale.

Guest speaker for the event was Michael Wilcox of the Purdue University Center for Regional Development, who focused on the collaborative effort needed to help community economic development thrive.

Timing is right in Greencastle and Putnam County, he said, for such a collaborative effort to enhance community opportunities with a new mayor, new university president on the way, a new Chamber president in place and a new Convention and Visitor Bureau director on the horizon.

Such collaboration is vital, Wilcox stressed, because "Kristin (Clary) isn't coming in here with a silver bullet."

He also stressed that buy-in is necessary from those in the community "who haven't yet drank the Kool-Aid."

Local officials, he added, need to create that buy-in and transition it to active engagement through a collaborative effort.

"It's fine to clap," Wilcox assured, "but that's not getting your keister out of your seat and rolling up your sleeves."

The key, he said, is to make the public understand what's good for the whole community.

Otherwise, Wilcox said, "people will do everything they can to stop you, if you don't have buy-in."