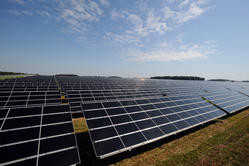 Project Development Manager Andy Cooper reported Wednesday that the farm is complete, but began by addressing matters at the Bainbridge solar farm located across town.

"We continue to have issues at Bainbridge," Cooper said of a blown fuse and problematic software. "We're working closely with LG and we're doing everything within our power to get that resolved.

"Being that the equipment is still under warranty, we have to take their advisement and they've been walking us through things to do," Cooper continued. "I think we've got a good resolution. (LG) has sent us a patch -- similar to a software update for your phone. We downloaded that software yesterday and it took off and worked fine.

"What we don't have resolved, we are close to finishing."

Vice President of Sales and Operations Jamie Krynski then reported on the site next to the high school.

"We have finished Project B, which is the (heating, ventilation and cooling) for the east and south end of the school," Krynski said. "We only have a day or two of duct work to do, but the work is essentially 100 percent done.

"The solar aspect is also done and we are now in coordination with Duke (Energy) to make sure we have everything right," Krynski continued. "That will continue for the next couple of weeks."

Krynski went on to give some admittedly exciting news concerning the solar farm's status.

"We produced enough electricity (Tuesday) to offset your needs at the schools, so that will be the trend as we move forward," Krynski said, citing that any extra energy produced will be returned to the corporation in the form of credits from Duke Energy. "Things are moving along really nicely and we're going to start de-mobilizing next week, so you'll start to see our safety fence come down, our job trailers will be removed and there will just be some technicians there for the next three weeks or so.

"The project should really start taking off and (the board) will start to realize the savings."

North Putnam and Bainbridge, respectively, have each had solar parks constructed within the last year as town officials redouble efforts to become a green city.

Indiana Municipal Power (IMP) has had an integral role in the development of the Bainbridge site, located on West Vine Street, while Indianapolis-based Johnson-Melloh has taken the lead in cooperation with the North Putnam School District.

* The board approved the use of Cutting Edge Lawn Care by a vote of 6-0 to provide landscaping and lawn care needs throughout 2016. Cutting Edge was one of seven bids received by North Putnam.

* The use of a Sonitrol Security System was eventually approved by a vote of 4-2 after some discussion. Superintendent Dan Noel said he wants to have a security system for front-office personnel because its current status can "let anyone walk through those doors."

Sonitrol is currently in use at other buildings within the district.

* Professional leave was sought for three employees Wednesday with two receiving approval: Rebecca Scotland will be attending the FCCLA State Leadership Conference in Indianapolis Feb. 25-27; Beth Waterman will be attending the Focus on Inclusion Conference in Indianapolis Feb. 23-24; a third employee, who remained unnamed, was denied leave directly from Superintendent Noel on the grounds that a "sick leave" request was received but the employee is admittedly not sick. After three days, Noel noted, an employee must return with a doctor's note. However, said employee will be traveling for missionary work.

"This person has requested sick leave and a substitute for six days," Noel said. "I believe that, if we grant this request, the situation would become a precedent for other employees with the corporation.

"I have nothing against mission trips and such things, but I have already denied it."

Other board members echoed Noel's comments that, while they are heavily in favor of such works, the leave request may set a dangerous precedent that could cause future problems.

* Attendence to a livestock judging competition was approved for several students. The contest will be located at Lakeland College in Mattoon, Ill., on March 19.

* An overnight trip to attend a second livestock judging competition was approved, this time at Purdue University May 20-21.

* A Board Workshop date has been set for Wednesday, March 2 at 6 p.m. in the administration office.

* The assistant treasurer and transportation offices have been taking on extra responsibilities of late, Noel said. Therefore, a motion to approve a $750 stipend (to be divided between said employees) was given and upheld.

* A donation to accept a Target Field trip grant was approved in the amount of $700 for Bainbridge Elementary.

* The hiring of 15 coaches ahead of the spring sports season, ranging from volunteers to head coaches, was tabled Wednesday after a 4-2 vote initiated by member Jill Summerlot until the board's next regular session in March. Summerlot cited that additional information and thorough background checks be confirmed before any action is taken.