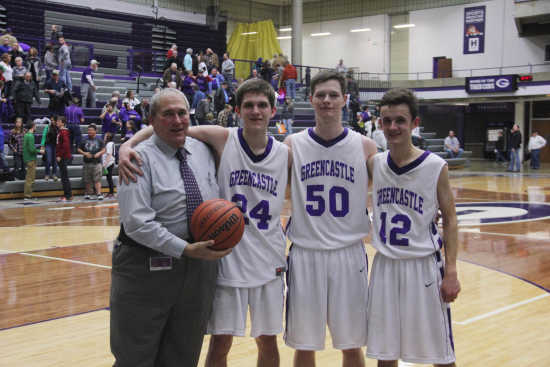 Coming off its disappointing finish in the Putnam County Tournament, the Greencastle boys' basketball team treated its home fans to a show at McAnally Center on Friday, defeating Southmont at home on Senior Night, 69-52.

"Going in, I didn't know how we would respond because Colin York was hurt," Greencastle coach Troy Greenlee said. "He's resting that arm and he did want to start for Ryan's last game at home."

York started the game but didn't play for very long and Greencastle went on to play and win despite being without one of its biggest offensive threats.

Greencastle was kick-started by Ryan Coble who knocked down three threes in the first quarter, two coming early. But GHS also saw Nick Costin knock down a three and a two and with two more points from Devin Clar, GHS had built a comfortable 19-9 first-quarter lead after going up 13-4 early.

"I always felt like we were a little behind the eight ball," Southmont coach Jon Sparks said. "I think our players felt that way. Coble comes out and hits some really tough deep threes and we are down 13-2. I look at our defense and we aren't playing terrible defense. He's just drilling it."

Coble was hot early and his hot hand made two more threes in the second, which was convenient for Greencastle because Southmont began to find its rhythm netting 7 points to the Greencastle 18. Andrew Travers, Andrew Green and Jarrett Todd each made a three with Kaleb Swick adding two buckets to his first-quarter three.

Greencastle combatted the confident Mountie offense with some team ball coupled with good defense. J.T. Matthew got into the mix, scoring four points from the floor, Costin stayed effective making a three and a two off two Coble assists, and Clar picked up the bucket and the foul on a tough layup inside and Clar converted the foul shot.

"We played some guys that haven't played a lot of minutes this year and they really did a great job," Greenlee said. "They stepped up and got us stuff on both ends of the floor."

Defensively Greencastle was effective with its man-to-man forcing bad passes that led to points in the second and more points in the third. Coble earned four first-half steals with GHS earning eight.

"We didn't handle (man-to-man)," Sparks said. "It's hard to have rhythm when you keep turning the all over. We had a streak where we turned it over six out of seven possessions. When you aren't getting any shots it's really hard to have rhythm. Give them a lot of credit. We've got to take some blame for execution."

In the third GHS extended its 36-26 halftime lead with a variety of players adding to the cause. Jacob Sanders went three of four from the foul line, netting three of his seven points. Zack Wilkerson, who compiled four boards and three assists on the night, added three points. Clar added two of his 11 and Costin continued producing as he scored one from downtown and two from the foul line.

GHS outscored the Mounties 19-12 in the third and both teams scored 14 in the fourth. The players seemed to mirror each other in the fourth, with one team answering a good play with another but the Tiger Cubs managed to hold their lead until time expired.

For three seniors and Jacob Lewis, who could not play due to illness, this win culminated four year's worth of Greencastle basketball.

"It's had its ups and downs," Sanders said. "It's been a lot of disappointments and a lot of excitement. I love it. I love the team, I love just playing basketball. I want to thank my team for being there for me and playing the hardest when we needed it."

Wilkerson, who is very active in not only the GHS athletic community but has become a staple on the entire Tiger Cub scene, said he enjoyed the privilege to play at McAnally for four years.

"It's been a great challenge trying to be the best teammate I can be," Wilkerson said. "I'm trying to balance a lot of different sports schedules and school schedules everything. But it's been an honor and a pleasure to play at Greencastle. I've had great opportunities in the community to build friends and build teams with my friends and classmates."

Coble who is the seventh player in Greencastle history to score 1,000 points during his four-year career said he has three or four great memories at GHS but one stood out in particular, the match at Tri-West where the Bruins were favored by at least 20 points.

"In the third quarter we stepped it up and had a 13-point lead," Coble said. "They was the first time Greencastle had had a lead on Tri-West in a long time. Went to the fourth they fought back. It was tied at one point with two minutes left. But we have a whole bunch of guys on the team that are willing to take that extra step and not play for themselves but play as a team. That's what separated us from other teams and that was the most fun I've had playing for Greencastle in the four years. Beating Tri-West this year."