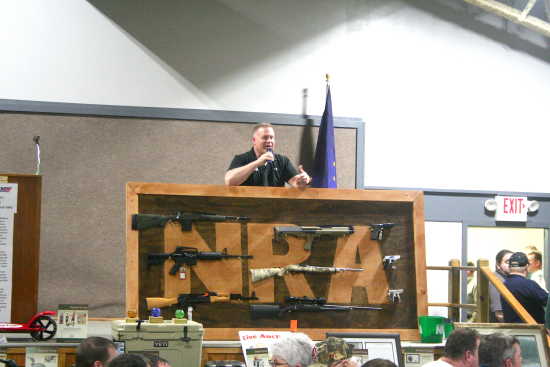 National Rifle Association field representative Craig Haggard and more than 350 patrons came to the Putnam County fairgrounds Friday to take part in a fundraiser headed by the NRA and local organizers.
Order this photo

When it comes to firearms and raising money, the National Rifle Association (NRA) is the group to see.

That's what around 350 people did Friday at the Putnam County Fairgrounds, participating in a win-win scenario with free guns and a good cause.

With door prizes, "table guns" to give away and a myriad of weapons to be auctioned, the NRA and local organizer Clint Cooper hoped to raise another $1.1 million for a 50-50 share between the group's national headquarters and the state of Indiana.

"Each year there are 24 events across the state and this is one of the biggest," Cooper said. "Half of the money raised each year goes to the NRA in Washington (D.C.) and half stays here in Indiana.

"Last year we raised over a $1 million and some of it stayed right here in Putnam County."

Overall, the state of Indiana received $558,260, going to more than 100 organizations altogether.

A $100-a-ticket gave patrons unlimited access Friday to a number of games and raffles held throughout the evening, which included a $40-a-plate dinner.

State Sen. Pete Miller and NRA field representative Criag Haggard were present and spoke after the meal as Friends of the NRA, a "committee of volunteers ... (who) make recommendations for local grant funding in areas such as youth firearm safety and education programs."

For more information on how to donate to the NRA or any of Putnam County's chapters, visit friendsofnra.org or nraila.org.