Road funding has miles to go in Legislature 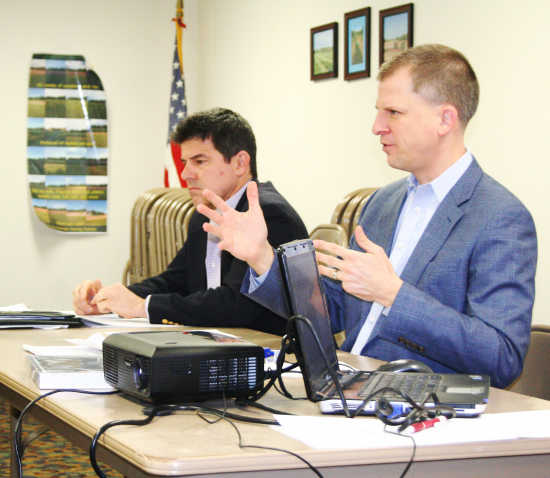 Making a point during discussion Saturday morning at the Legislative Update program at the Farm Bureau board room, State Sen. Pete Miller addresses some 30 members of the audience as State Sen. Rodric Bray listens as well.
Order this photo

With a little more than two weeks to go in the 2016 edition of the Indiana General Assembly, some major decisions lie in the road ahead for Hoosier lawmakers.

State Sens. Pete Miller and Rod Bray tried to distill those remaining issues into palatable nuggets for a Legislative Update audience Saturday morning at the Farm Bureau board room in Greencastle.

"The biggest issue we're still struggling with is road funding," Miller (R-Avon) told about 30 constituents who also voiced concerns over educational, environmental and agricultural issues during the 90-minute program.

Road funding, Miller continued, "is probably one of those things that will come down to the last week" before it is eventually decided.

Legislators have been hoping for bipartisan agreement on House Bill 1001 but that hasn't happened yet. House Democrats have one proposal and House Republicans have another, and thus far those two have not been merged into a single passable piece of legislation.

But before the March 10 end of the session hits, Sen. Miller sees accord in the road ahead.

An increase in the gasoline tax or cigarette tax or even creation of a toll road appear to be the proposed methods of providing new road funding sources.

According to the Indiana Legislature website, House Bill 1001 provides for the transfer of the state's excess reserves to the local road and bridge matching grant fund and the state highway fund.

As originally written, HB 1001 would increase the gasoline tax from the current rate of 18 cents per gallon to an indexed rate to be determined by the Department of Revenue, while increasing the cigarette tax to $1.995 per pack.

As it currently stands, the bill -- which is now before the State Senate -- would include a four-cent increase in the gasoline tax and a $1 per-package increase on cigarettes.

"The challenge is trying to get funds back into the hands of local government," Sen. Bray said.

The bill would also require the Department of Revenue to study methods of indexing fuel tax rates and report to the interim study committee on roads and transportation. It also provides that the state seek a waiver from the Federal Highway Administration to allow toll lanes on Interstate 70, Interstate 65 and Interstate 80/94, while requiring a feasibility study of tolling on those interstates be conducted.

One of the concerns for lawmakers, Sen. Bray said, is that the funding would be "relying on two things that aren't long-term themselves" in the gasoline tax and the cigarette tax.

People are driving fewer miles, using alternative fuel sources and vehicles are getting better gas mileage, he noted, which combine to lessen the overall available pot of money from the state gasoline tax.

The added cigarette tax, meanwhile, is seen as discouraging young people to even start smoking, which in the long run, while a positive for society, will actually serve to lower the amount of cigarette tax money available to counties, Bray noted.

Meanwhile, another bill that could help fund local roads and bridges is Senate Bill 67, seen as a one-year program to disburse supplemental distributions of local income tax.

The funds would be used exclusively for local road construction, maintenance or repair or capital projects for aviation, including capital projects of an airport authority or deposited in a rainy day fund.

Such a disbursement would mean more than $1 million to Putnam County and approximately $580,000 to the City of Greencastle, Sen. Bray said.

Looking at those with a perception "a mile wide and an inch deep," he said, the Senate has passed 153 bills out, including 93 unanimously, while the House has passed 115 bills out this session. 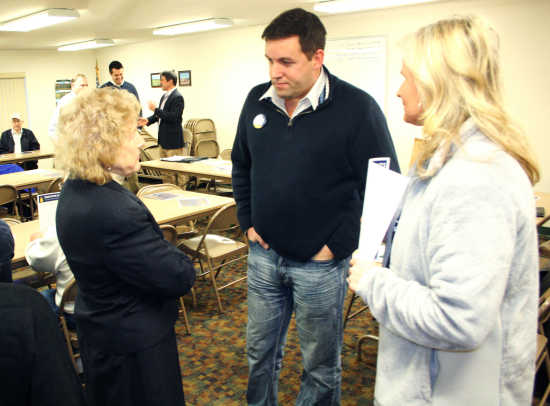 John Crane, an Avon Republican running in District 24 against Sen. Miller in the May 3 primary, was introduced to the audience.

Accompanied by his wife, Jane, Crane said they have four children age 12 and under, which is "part of the reason" he is concerned about the future and wants to help manage it.

Crane said he has been "heavily involved in leadership development for the next generation of leaders" and has been quite concerned "about some negotiating on what I believe are non-negotiables."

Meanwhile, District 44 State Rep. Jim Baird (R-Greencastle) was not in attendance at the Putnam County event. He instead attended similar events Saturday morning at both Spencer and Brazil.

Farm Bureau spokesman Steve Cash announced that there will not be a local Legislative Update program for March with the session scheduled to end on March 10.