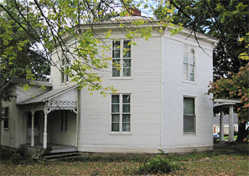 A proposed National Register district in Cloverdale includes a circa 1848 octagon house, one of only a handful remaining in Indiana. (Courtesy photo)

Indiana Landmarks recently awarded a Partners in Preservation (PIP) grant to the Heritage Preservation Society of Putnam County (HPS), which is pursuing National Register nominations for downtown historic districts in four Putnam County communities as one of the county's Indiana Bicentennial projects.

PIP grants allow recipients to pay for the services of a professional consultant to complete the National Register nominations. The Heritage Preservation Society (HPS) has hired such a consultant to nominate districts in Bainbridge, Cloverdale, Roachdale and Russellville, each of which include a mix of historic commercial, civic and residential buildings within their downtown areas.

The Carnegie Library in Roachdale, historic grain elevator in Russellville, and circa 1848 octagon house in Cloverdale (one of Indiana's few surviving octagons) are just a few of the significant historic structures found in the proposed districts.

Residents may see someone roaming the streets of these communities assessing the viability of structures to be contributing structures in a historic district and taking pictures. Presentations by the consultant, Rose Wernicke, on the proposed historic districts will be scheduled for the public in each community.

In addition to the honor accompanying approval of these historic district nominations, listing on the National Register of Historic Places will enable these communities within Putnam County and their residents to be eligible for state and federal tax credits and public and private grants. Additionally, such a listing provides some protection against federally funded projects that adversely impact these districts. Such a listing does not entail any federal restrictions on property owner's decisions regarding their properties, unless they receive federal funds for work on the properties.

A key qualification for the structures that have been restored through the Stellar Community Award in Greencastle is their status as contributing structures in a Nationally Listed Historic District. However, it does not require a Stellar Grant for such a benefit to be realized. At least one business on the Courthouse Square had been awarded a tax credit for work the owner conducted prior to the Stellar Grant Award.

The Envision 2016 Grant awarded HPS in 2015 by Putnam County Community Foundations (PCCF) was to support HPS's Bicentennial Project. This project included the National Register listing of Historic Districts in these communities and the development of walking brochures of the districts.

The Historic District Walking Tour Brochures that will be produced for each historic district are seen as positively impacting both education and economic development.

Recently produced Historic District Walking Brochures for Greencastle have dramatically increased interest by both locals and visitors in those Historic Districts; the Putnam County Convention and Visitors Bureau (PCCVB) has had to reprint these brochures, due to exhausting the original supplies. The brochures serve as instructional material for teachers who teach school children about local history. The PCCVB has pledged funds to assist in the production of brochures for these new Historic Districts. HPS has also coordinated with Ball State's Department of History to develop walking or driving tour smart phone applications, as well.

The completed Historic Districts in Greencastle and their associated walking brochures have been well received by local residents. The National Register Listing of Historic Districts for Russellville, Roachdale, Bainbridge and Cloverdale can have the same positive impact on those communities.

Learn more about the Heritage Preservation Society of Putnam County on the group's Facebook page.