Sheryl Ann Brewster Roe, 60, of Alvin, Texas, passed away on Feb. 11, 2016 in a plane crash with the love of her life, James "Jim" Michael Shumberg, off the coast of Destin, Fla. 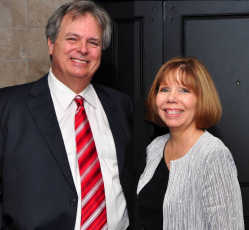 Sheryl met Jim 22 years ago at an Eagles concert in 1994, and they were inseparable even in death.

Sheryl was born on Jan. 2, 1956 in Fort Benjamin Harrison, Ind. She was the first child of Max Edward Brewster of Madison and Vera Alice Booker of Putnam County.

Sheryl went to North Putnam High School and married Stephen Eugene Roe on Sept 27, 1974. They had four children together before moving to Houston, Texas.

After their divorce, Sheryl was a single mother who completed her college degree, became a registered nurse, who worked with terminally ill AIDS patients, and later became a pain management specialist.

Later, she earned her master's degree in Chinese medicine and herbology and worked as an acupuncturist with offices in Fort Walton Beach and Navarre, Fla.

She leaves behind countless friends and colleagues as well as her family, including her sister, Tina Brewster and her life partner Rosa Williams; and her brother, Charles "Chuck" Brewster. She also has five children and seven grandchildren, Joshua (Roe) Branam and his wife Kerry Sapsky McCarty; Blu Roe, his wife Melissa McClane Roe and their children Alek and Kora; Carmen Mae Roe; Sibbian Roe and her daughters Willow and Lillian Emmons; and Nadia Roe, her husband Ronnie, and their children Gabriella, Gavin and Olivia Nava.