Clovers defeat Cougars, Eagles up next

North Putnam came out of the Southmont locker room ready to play. In particular it was Preston Porter who had the hot hand. The junior nailed four consecutive threes before Cloverdale took its first timeout, giving the Cougars a 12-2 lead.

"(We were) definitely concerned," Clover coach Patrick Rady said. "It was what we had feared. They have vastly improved from what they were in the beginning of the season. They stretch you out with shooters. It's one thing to say you know where Porter is. But we just didn't get out there. We didn't move on their time very well." 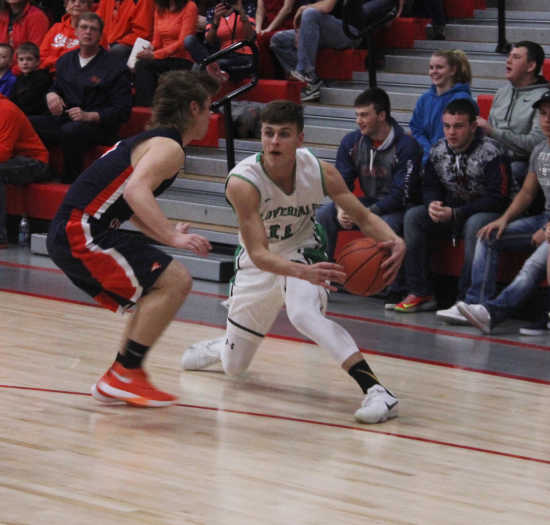 Rady said the plan was to come out in a zone to try and defend the passing lanes, but after Porter got loose CHS made to switch to man-to-man in an effort to unleash the "Chaos Defense."

"I thought we were able to get back and get some easy buckets," Rady said. "We cut it so quick. It wasn't tricky plays. It was tricky players. In March you've got to have that."

The tricky player was Cooper Neese for CHS who answered Porter's four threes with five of his own, a few of them leaning and off-balance and a few from NBA range.

"When Porter hit like three or four threes in a row, we weren't even trying to push the ball," Neese said. "We weren't trying to handle it ourselves. But when we came out of the timeout we were like, it's time to go. We stopped him from shooting the ball as much as we could and I hit a couple shots. We got to the bucket too, so we were mixing it up."

When Cloverdale committed to speeding up the tempo, North Putnam was right there with them. Winders made two buckets to help out Neese and the Clovers and Austin Judy added to the Cougar cause, making a three and two foul shots. The up-tempo first quarter ended with a 24-19 Cloverdale lead.

"I came out and told them to attack and play loose," Cougar coach Colin McCartt said. "That's when we've been our best. Preston came out and put on a show and we saw Cooper do the same thing."

Into the second the game slowed down a bit with Neese only making two buckets, a three and a two, Jalen Moore scored his first three points and Seth Pfaff scored his second bucket.

North Putnam continued to stay with the Clovers as Treyton Smith picked up five in the second while Duke Duff and Porter added a bucket each.

"It was a seven-point lead at halftime," Neese said. "We knew it wasn't nearly enough. They've gotten so much better throughout the year that we knew it wasn't enough. So we had to keep pushing the tempo even faster than we did in the first quarter."

The third quarter was the tipping point in the game. While CHS continued to score consistently helped along by three threes, two by Neese and one from Winders, North Putnam struggled to get traction out of the halftime break.

"I thought our defensive rotation was really good," Rady said. "A couple times our backside rotation really rotated well. Cooper and Jake (Wilkes) on the rotation on the back got a lot of deflections where they were getting layups or threes earlier. We were pressuring the perimeter."

Rady said his Clovers had worked on the defensive pressure on the perimeter and saw it come to fruition Tuesday night. Cloverdale won the third quarter 13-2.

The fourth quarter was competitive but CHS had already built a 48-30 lead and North Putnam was never able to catch up and despite a tough effort from NPHS, CHS kept the Cougars at a comfortable distance.

Cloverdale held a 38-21 advantage in the rebound column and one of the Cougars' biggest offensive threats Kyler Jeter was held to just two points. Neese had 15 rebounds and three steals for CHS. 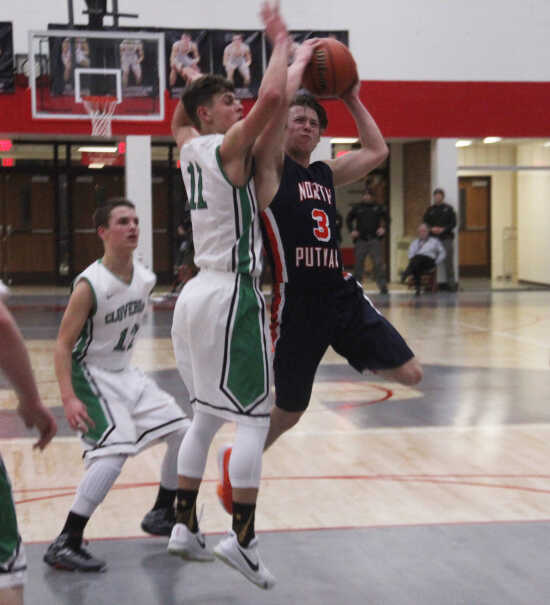 Duke Duff (3) of North Putnam puts up a shot from the paint guarded by Cloverdale's Cooper Neese. (Banner Banner/JAY LOCKETT)

North Putnam saw Jeter earn five boards and six from Duke Duff. With the loss, North Putnam finishes its season 8-16, after showing major improvement in the later part of the season.

"I think finally they kept grinding at it and working," McCartt said "Confidence is a funny thing. Once they realized they could do it you saw a different basketball team. I told our seniors that they left a legacy with building blocks, putting North Putnam back on the map.

CHS will next play South Putnam on Friday at 7:30 p.m. and Rady hopes he has the same crowd support as he did Tuesday. The Clover fans came out in there construction gear to help CHS do work in the sectional game.

"I really want to thank our administration for supporting the basketball team by having a fan bus," Rady said. "(Traci) Scott rode the bus with the kids as well as our cheerleading sponsor Debbie Atwood. If they wouldn't have stepped up we wouldn't have had the kids we did. That's another thing that fuels us. For our administration to support and our teachers and coaches to step up, they don't get paid for that. That was huge for us."

In game one of the Southmont sectional, Monrovia topped Cascade, 61-48. The Bulldogs will take on the host Mounties at 6 p.m. Friday.