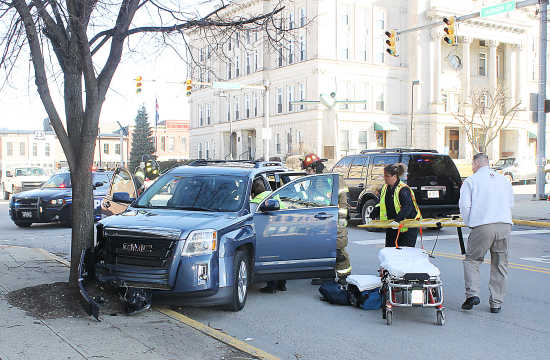 Emergency personnel prepare to transport a Greencastle woman to the hospital following a Wednesday morning crash downtown. Arlene Jarvis apparently passed out while making the turn from Washington Street to Jackson Street and crashed into a tree in front of the Greencastle Partnership Center.

A Greencastle woman was taken to Putnam County Hospital Wednesday morning after crashing her SUV into a tree just south of Greencastle's Courthouse Square.

At 9:37 a.m., emergency personnel were dispatched to a vehicle into a tree at 2 S. Jackson St.

Greencastle Police Officer Nick Eastham learned from a witness that the 2011 GMC Terrain was attempting to complete a left turn onto Jackson Street from Washington Street when the vehicle veered back to the right, crashing into the tree in front of the Greencastle Partnership Center.

The driver, 75-year-old Arlene Jarvis, told police she passed out while making the turn.

Besides whatever medical condition led to the accident, Jarvis complained of neck and chest pain following the crash. Operation Life transported her to Putnam County Hospital.

Impact with the tree caused extensive damage to the right front of the vehicle. Eastham estimated damage at $5,000-$10,000.