Airport Board to buy RDC land for more hangars

Two vacant building lots immediately north of the existing hangars at the Greencastle/Putnam County Airport are being sold to the Board of Aviation Commissioners.

The Greencastle Redevelopment Commission (RDC) agreed to that transaction Wednesday afternoon, approving Lots 6 and 7 with frontage along Ballard Lane to be sold to the Airport Board. 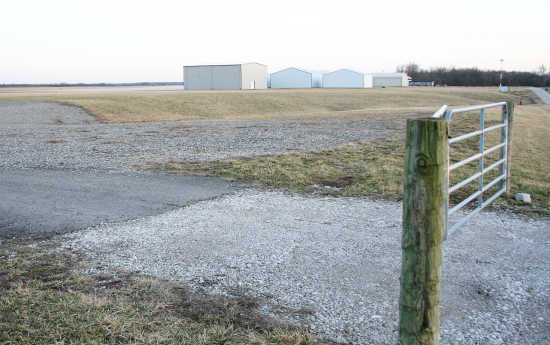 Two lots of the vacant property north (to the left) of the existing hangars at the Greencastle/PutnamCounty Airport are in the process of being sold by the Greencastle Redevelopment Commission to the Putnam County Board of Aviation Commission. The two lots total approximately 15 acres and will bring a combined reimbursement amount of $282,211.

Approximately 15 acres in all, the two Redevelopment Commission-controlled lots are being sold to the airport for a total of $282,211.

Lot 6, a 3.81-acre parcel with 276 feet of frontage, was added to the equation Wednesday with the sale price reflecting the reimbursable amount of what the Redevelopment Commission has invested in the property and the infrastructure on it. That total cost was listed at $70,845.

RDC is selling the lots for their reimbursement amount since the sale is to another unit of government.

It's all tax dollars, as Commission member Gary Lemon pointed out, "just not the same taxpayers."

Mayor Bill Dory, the former Greencastle/Putnam County Development Center director who has worked closely with the Airport Board on its previous projects, noted that "from the very beginning" the lots in question were "intended for future development of aviation."

Lot 7 was set up from the start for eventual purchase by the airport, Dory added.

The sale of the two lots for additional hangar development by the airport will still leave five lots and some 20 acres of property under Redevelopment Commission control along Ballard Lane.

Some of those lots, Dory noted, were set up so they could be easily combined if a bigger piece of property were needed.

Originally, he noted, those properties were seen as enticing to small manufacturers or aviation-related businesses desiring buildings in the 10,000-square-foot range.

None of that has transpired, however, thanks in part to what happened to the economy.

"We came close," City Attorney Laurie Hardwick told the commission, explaining that one project had progressed well but the business owner became ill and the transaction was never completed.

Dory notes the Aviation Board will likely ask the commission to finance the lot sale "over several years."

Redevelopment member Lemon suggested "no more than five years" in making the motion to approve the sale.

No paperwork has yet been exchanged in the matter. The airport group has only asked the commission to agree to sell the lots to it.

The money resulting from the sale, once received by the commission, could then be used on another community project, Mayor Dory pointed out.

In other business, the Redevelopment Commission agreed to fund training grants -- in an amount not to exceed $150,000 -- as part of the incentive package for Ascena Group and its expansion.

Technical training was offered as an incentive to Ascena expanding locally and retaining the workforce here but the state took its contribution off the table, Dory noted.

Funding such training is something the RDC has also agreed to do for Crown Equipment and Phoenix Closures, Dory said. Reimbursement is done after the training, which means the Crown and Phoenix efforts will likely be paid this year. To date, no repayment has been made on the technical training efforts, Dory said.

Funding of such training grants, Dory noted, is allowable by the state statute covering redevelopment commissions and the TIF (tax increment financing) districts that fund them.

Meanwhile, the commission welcomed new member Lottie Barcus, a financial adviser for Met Life, who has been appointed by the Greencastle City Council to succeed Tanis Monday, who has moved outside city limits.