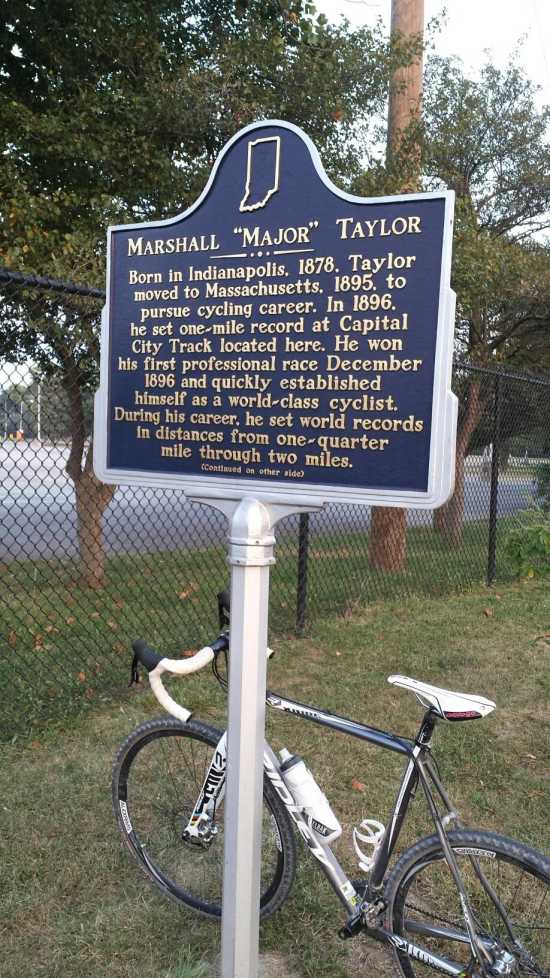 On Dec. 11, 2016, Indiana will celebrate its 200th birthday. A considerable number of activities are being planned to celebrate Indiana's bicentennial.

Indiana is rich with history. The landscape of the great state has many historical markers that often are ignored. Some statues are markers are recognized, yet many do not know the history or know the name of the person illustrated as a statue. In this case, I was able to learn a lot from my son's research last year about an Indiana hero I have never learned about in my historical studies.

During Marshall's childhood, he performed bicycle stunts in front of a store and played and lived with Dan Southard. Dan's family was a wealthy white family who bought Marshall one of the newest types of bikes built at the time. Without this help, Marshall would not have had a bicycle which was tool that with Marshall's perseverance led to his world acclaim.

Marshall's first bike race was when he was 13. He broke world records and worked a paper route to support the family.

Though he did not have funds to attend college, Marshall raced bicycles. He was taught at home by a tutor where he learned to read and write. When Marshall was an adult, he married Daisy and had one child named Sidney. He became one of the greatest bicyclist of all time becoming world resound.

Sadly Marshall's life concluded with him experiencing numerous occasions of discrimination, family complications and he was buried in an unmarked grave. Later his resting site was moved to a better area of the cemetery with proper markings by a group of individuals who wanted to give him a proper burial. Marshall died penny less on June 21, 1932 at the young age of 53. Today this historical sign highlights how he forged a great path for African American advancement and the spirit of competition to succeed.

The Indiana 4-H program this year has a SPARK Club option where youth will participate in a program to learn and develop life skills. To foster citizenship, the Putnam 4-H program will offer an Indiana History Bicentennial SPARK Club activity. There will be opportunity to travel and visit significant Indiana history locations. Contact the office if you would still like to join this fun activity.

Visit www.extension.purdue.edu/putnam or you can contact the local Purdue Extension Office by calling 653-8411 for more information regarding this week's column topic or to RSVP for upcoming events. It is always best to call first to assure items are ready when you arrive and to RSVP for programs. While many publications are free, some do have a fee. Purdue University is an equal access/equal opportunity institution.