DePauw University's Board of Trustees has unanimously selected D. Mark McCoy, dean of the DePauw School of Music since August 2011, as the new president of DePauw, effective July 1.

McCoy succeeds Brian W. Casey, who is leaving at the end of the current academic year to become president of Colgate University in New York. 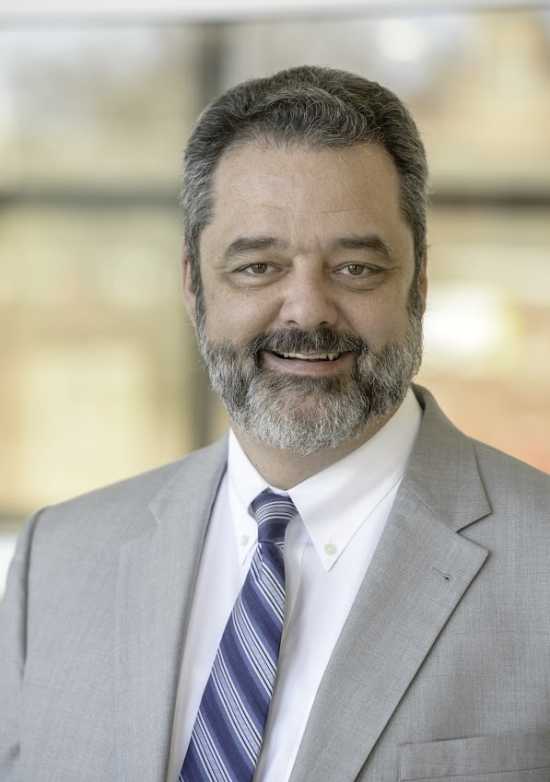 After months of work, an 18-member presidential search committee -- led by 1985 alumnus Kathy Patterson Vrabeck and consisting of DePauw alumni, students, faculty and administration -- came to the conclusion that the top candidate was already on campus.

That committee, assisted by Isaacson, Miller, a premier search firm in the higher education and non-profit industry, sent the choice of Dr. McCoy to the Board of Trustees. Monday's vote confirms the selection.

"We had a tremendous pool of candidates, over the course of our national, six-month search, who brought very strong credentials and diversity in their personal and professional backgrounds, as well as an understanding of the unique experiences a liberal arts college can provide," Vrabeck noted.

"Of all of the talented and dedicated individuals we considered, Mark McCoy was the clear choice to lead DePauw as our 20th president. He knows and loves this institution, shares our community's ambitious vision for our future, and is a dynamic leader who will be an immediately effective advocate and ambassador for this place we love."

Marshall Reavis, chairman of DePauw's Board of Trustees and a 1984 DPU graduate, called McCoy's tenure as dean "highly impactful."

"Mark has greatly raised the profile of the DePauw School of Music, the sixth-oldest school of music in the nation, and invigorated its offerings with the creation of the 21st Century Musician Initiative," Reavis said. "He has also increased multicultural enrollment in the School of Music by 10 percent to levels that are the highest in our history.

"Equally powerful have been his efforts to engage the Greencastle community and Putnam County schools with the music programs offered by DePauw, with last summer's opening of Music on the Square -- located in the heart of downtown Greencastle -- as an important agent of that outreach."

A native of West Virginia and the son of a coal miner, McCoy holds a B.A. in music education from Shepherd University, a liberal arts college in West Virginia, a master's degree from the Peabody Conservatory and a Ph.D. in fine arts with a concentration in music composition from Texas Tech University.

"As a first-generation college student, I believe the undergraduate experience should be inspirational, aspirational and transformational," McCoy said. "I can imagine no college in America that can do that better than DePauw. Our alumni set a high bar and provide shining examples of how DePauw graduates make more than a living -- they make a life."

He taught theory and jazz at Texas Tech before serving 16 years as the music executive and a faculty member of Shepherd, where he oversaw 300 percent growth in the music program, a revitalization of facilities and a community based "Friends" group that raised money and community support for department initiatives.

At DePauw, McCoy led the 2013 launch of the 21st Century Musician Initiative. Unique to American higher education, it is an extensive re-imagining of the professional music school curriculum and student experience with the aim to create flexible, entrepreneurial professionals prepared for the challenges of today's music world.

During Dean McCoy's tenure, he raised $23 million for the university and positioned the music school and DePauw as a major cultural destination for the region.

Music on the Square has created an innovative musical "communiversity" providing early childhood music, applied lessons and life-long learning courses to the community. Attendance at School of Music events has doubled in his five years as dean, and McCoy partnered with Yo-Yo Ma to create the "Silk Road Global Musician Workshop," which brings musicians from around the world to perform in Greencastle with the world renowned Silk Road Ensemble each June.

"In today's higher education climate, DePauw must be more than one of the best -- it must be one of a kind," declares McCoy. "I believe this board, administration, faculty and staff can provide a one-of-a-kind, life-changing experience for our students." 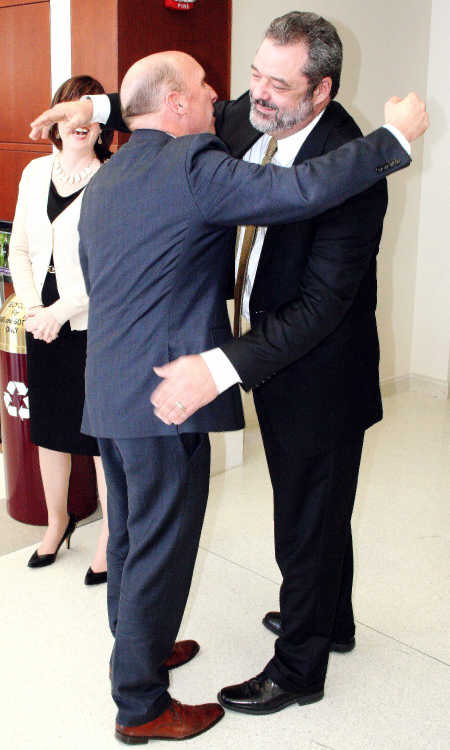 Newly named DePauw University President Mark McCoy (right), who takes over the reins on July 1, gets a hug from out-gong DPU President Brian Casey during a reception in McCoy's honor Wednesday mornng at the Green Center. Banner Graphic/ERIC BERNSEE
Order this photo

"The merging of DePauw's dynamic and distinguished academic program with President-elect McCoy's energy is a tremendous opportunity for the university," Anne F. Harris, vice president for academic affairs and professor of art and art history, said. "His commitment to academic excellence and innovation will meet and amplify the institution's enduring dedication to its students."

Adds Brad Kelsheimer, vice president for finance and administration at DePauw, "Dr. McCoy has an advanced understanding of and demonstrated passion for addressing access and affordability concerns in higher education. Throughout the search process, it became clear that Mark will make affordability a high priority in resource allocation decisions and fundraising efforts and that his skill set is ideally suited to addressing this important issue."

"The relationship between Greencastle and DePauw dates back to 1835, when citizens collected $25,000 to convince the Methodist Church to locate a college here," Dory noted. "As dean, Mark McCoy has celebrated and built upon the campus-community connections, and I am very excited about what his presidency will do to carry these important bonds to higher levels."

McCoy has been selected for several executive leadership development programs, including the Executive Leadership Academy of the Council of Independent Colleges, the "Advancing to the Presidency" Workshop sponsored by the American Council on Education and the Harvard Kennedy School on Executive Education's Crisis Leadership in Higher Education Institute. He is a regular visitor and contributor for the National Association of Schools of Music and served on the National Commission on Accreditation.

"Mark McCoy's leadership of the DePauw School of Music has demonstrated that he is a person of vision and energy," said Reavis, a Management Fellow at DePauw who is founder and president of SVM. "He is also cognizant of the challenges facing this college and others and that will require innovative thinking.

"In times when families are taking a hard look at the cost of higher education and its value proposition, we must ensure that the DePauw experience remains transformative, relevant and accessible. Mark McCoy is up to that task, is very familiar with the campus and its culture, is passionate about making the university a more diverse and inclusive place, and is a proven fundraiser who will energize the ongoing Campaign for DePauw. He will ensure that tomorrow's DePauw students have even greater opportunities to learn and succeed."

Two receptions are planned for Tuesday, March 8 at which members of the DePauw and Putnam County communities are invited to greet DePauw's new president. From 11:30 a.m. to 1:30 p.m., McCoy's appointment will be celebrated in the Great Hall of the Judson and Joyce Green Center for the Performing Arts. A second reception will take place from 5:30-7:30 p.m. for those unable to attend the earlier event.

Nationally recognized as one of America's top liberal arts colleges, DePauw was founded by the Methodist Church as Indiana Asbury. Known since 1884 as DePauw, the University is a private, selective, coeducational, residential, undergraduate College of Liberal Arts with a School of Music which is the sixth-oldest in the nation. The university's 2,265 students come from 44 states, the District of Columbia and 36 foreign countries. A full-time faculty of 225 ensures class sizes average fewer than 18 students, engendering a rigorous academic environment that encourages participation, expression and individual attention to students' needs.

DePauw ranks fourth among the nation's baccalaureate institutions in the number of students who studied abroad in 2013-14, according to the 2015 Open Doors Report on International Educational Exchange. It is also included among "25 colleges that will jump-start your career" in a new analysis from Business Insider.