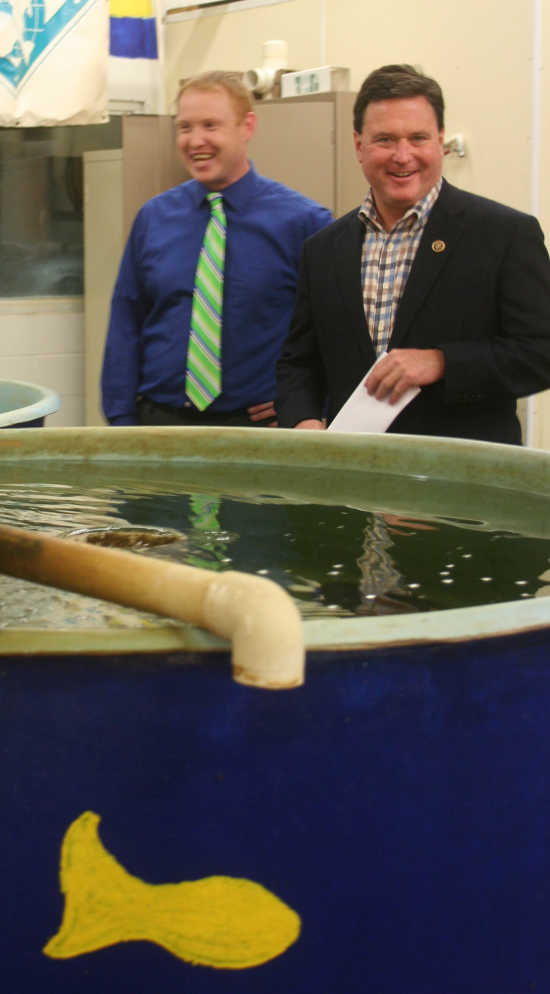 Students' comments after the speech consisted of "I feel he skirted around the questions that everybody had. He tried to get it back to what he believed in" and "I'm upset that he changed my question from a civil rights issue to a budget issue." Before delivering his speech, Congressman Rokita toured the school while talking to Principal Mike Schmipf about school safety and his latest bill, the Every Student Succeeds Act (ESSA), which President Obama recently signed into law. The measure permits the state to determine when, how and how long to test student performance, and effectively scraps the No Child Left Behind Act.

"This one-size-fits-all doesn't work," Congressman Rokita said. "We have returned education where it belongs under the Constitution."

Education was again a topic during the question-and-answer portion of his speech, but first Congressman Rokita opened his remarks with, "I came here to serve you, the newest adults in our society."

He went on to explain the national debt and federal budget to the students, saying the portion he can actually vote on is the discretionary spending constituting just a third of the budget. The other two-thirds of the budget is protected by entitlement law.

"Right now I don't see a clear pathway for us, politically, to pay for it," Congressman Rokita said. "It's going to be your responsibility. I can't think of anything more unfair. We are the first generation to leave the next generation worse off than we were. So what do we do? I need your help. If you don't get involved, then it'll be that much harder to get these changes and you're going to get the bill."

When the floor was opened for questions, the first student asked how he would appeal to young voters. Rokita answered that his presence at the school was part of it, but that no matter who the candidate was, "The question is: Are (the candidates) telling you the whole story? It is a matter of thinking critically, to take in information and compare and contrast it. That is what a free society needs. We can't have engaged robots."

The next question concerned how he felt about Trump's inappropriate remarks. Rokita said that while Trump says things he would not, he is more concerned about why that appeals to voters. He believes they are appealing because voters are angry, and he asked the student what she believes.

"You guys are too scripted," he said.

She agreed voters are angry, and stumbled out her answer to what they were angry about when Congressman Rokita rather impatiently asked for details. He asked another student what she thought, and she mentioned in her answer she was angry about Gov. Mike Pence's attempt to keep refugees out of Indiana.

Congressman Rokita responded that he does not feel confident about taking in refugees considering the government's open admission that it cannot properly investigate each one.

"My first duty is to federal and national security," Congressman Rokita said. "It is not about whether we're being mean."

The next question he answered asked how he would balance the national budget, increase revenue and cut programs. He answered that the U.S. has a spending problem rather than a revenue problem, and the only way to balance the budget is to reform entitlement laws for the next generation.

Another student asked what he would do to improve education issues like student performance testing, teacher accountability testing and wages.

"I would like to pay every good teacher $1 million," he said, "How do you know a bad teacher from a good one?"

He went on to explain how the ESSA is different from the No Child Left Behind Act, and that allowing the free market to work on teachers, parents and competition would naturally select for the best teachers.

The question following asked how he would address racially unequal enforcement of drug and violence laws, which he said he views from a budgetary perspective. He explained that it is a problem for people of any race to have offenders improperly rehabilitated and sitting in prison.

When another female student, the fifth since the first question, stood up to ask her question, Congressman Rokita jokingly asked, "Do the men speak at this school?"

He apologized to the student, but asked to hear from another young man before he left. The student asked how he would limit government over-reach. Congressman Rokita said that "what's really happening now is executive over-reach," but that this is partly Congress's fault for letting decisions, like going to war, go forward without due Constitutional process.

Although some students were not impressed, Rokita did have good things to say about South Putnam High School.

"I have seen the best and the worst of schools," he said. "You are very lucky to be at this school."