She was born Sept. 5, 1933 in Shipshewana to Noah and Lovina (Miller) Hochstetler. 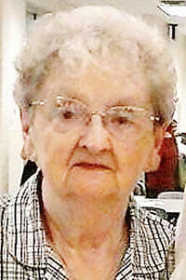 She was preceded in death by her parents; her husband; six sisters, Katie, Vicki, Shirley, Margaret, Martha and Amanda; four brothers, Howard, Floyd, Pete and Harry; and a great-grandson, Zachary Bontrager.

She worked in production at Sun Metal and following retirement, at Chore-Time Brock.

Friends may call Monday, March 14 from 5-7 p.m. A Tuesday funeral service will be conducted at First Baptist Church, Goshen, starting at 1 p.m.

Memorial contributions may be made to First Baptist Church for the Grenada Mission Trip.

Online condolences may be shared at www.yoderculpfuneralhome.com.