Neese is Player of the Year 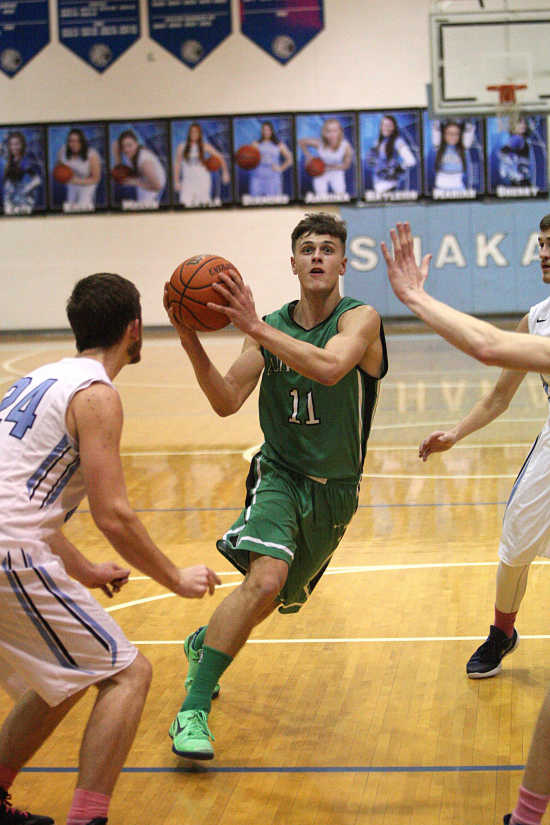 He averaged 29 points per game this season while leading the Clovers to their second consecutive regional berth and a 19-8 record, and it comes as no surprise to the county basketball fans that Cloverdale junior Cooper Neese has been named the 2016 Putnam County Player of the Year.

"Cooper is the ultimate competitor," CHS coach Patrick Rady said. "Since I have had the privilege to coach him as an assistant and now a head coach Cooper likes to compete at everything he does."

The Banner Graphic Player of the Year is selected as the player making the most valuable contribution to his team's image and success and having the highest character both on and off the court.

Being such a competitor Neese put up the effort in every single game he played this season and was a consistent scoring threat from everywhere on the court. He was third in the state this season with 111 three-point shots made.

"If you have a shooting drill he wants to know what the record is and will not be satisfied until he breaks it," Rady said. "He wants to win every drill every day. I think this attitude carries over into the games."

It certainly does. At the beginning of the season Neese may have been known as a perimeter shooter, having the ability to get hot with the flick of the wrist. But halfway into the season it was clear Neese was not satisfied simply being a perimeter threat. Neese developed into a slashing type of scorer, able to get points from the mid-range and in the paint. This type of offensive production combined with his increasingly deep range helped Neese to his 29.5 points per game which was third in the state this season behind two seniors, and 34th in the nation.

Neese has started every game since he was a freshman and during that time the Cloverdale basketball program is 60-16. It has earned two sectional titles, two Putnam County titles, two conference titles, and a Cloverdale Holiday Classic championship.

"Cooper is a gym rat, he loves to work on his craft," Rady said. "There are many nights that I have to tell him and Jalen Moore I have to go. I can't stay here all night. It's been a long time since I have had two players, like Cooper and Jalen, that love the grind of working on their individual game."

The gym rat's game has certainly benefitted, as Neese isn't just known as a scorer. His 9.2 rebounds per game was 25th in the state this year and his 3.4 steals per game was 10th.

Neese has one more year to shine at Cloverdale before he continues his career at Butler University and only time will tell how much more he can improve and how much farther he can lead the Clovers next season.

"In a conversation I had with Cooper I asked him what he wanted his legacy at Cloverdale to be and he said 'a winner,' Rady said. "Cooper's mind set has rubbed off on his teammates. I feel our players expect to win when we hit the floor. I also think that has made a difference in the close games we have won over the past three seasons."

Competing with Neese for top honors in Putnam County and on the Indiana scoring charts was Greencastle senior Ryan Coble.

Coble was a consistent scorer last season putting up 17 points per game. His season year however Coble's point total jumped to 27 points per game placing him fifth in Indiana scoring this season. 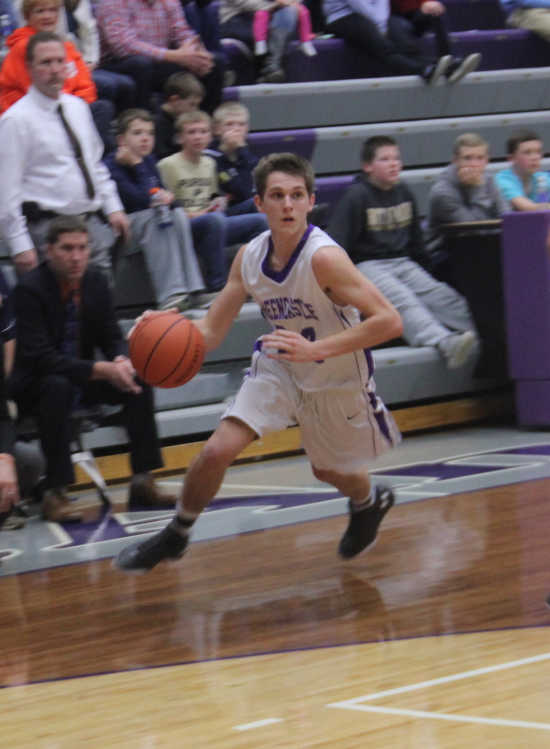 Coble helped the Tiger Cubs to a 10-13 season with big games all year, including 12 games with 30 points or more and two back-to-back games against Rockville and South Vermillion with 45 and 42 points respectively.

The senior led the county with 5.7 assists per game and was also beneficial on the boards recording 8.6 rebounds a game, which was third in the WIC.

GHS fans have been treated to four years of Coble's prowess and the Tiger Cubs will be sad to see him go. The senior has expressed interest in Judson University located in Elgin, Ill. saying he would like to study pre-pharmacy.

Joining his Clover teammate on the floor and on the All-Putnam County first team is Jalen Moore. The sophomore saw ample varsity time last season while playing on the JV as well and this season Moore become one of the most menacing players in the WIC.

Moore put up 18 points per game and while only 5-4 he was fifth in the WIC East with 4.2 rebounds per game.

Moore was most productive when he was penetrating the lane because not only was he able to finish through contact but Moore was proficient at kicking to shooters after drawing defenders. He was second in the county with 4.4 assists per game.

But his defense won a lot of games for Cloverdale this season. His 2.7 steals per game don't fully tell the story because Moore was ferocious on opposing ballhandlers and could typically force them into mental errors resulting in turnovers going the other way for Cloverdale. 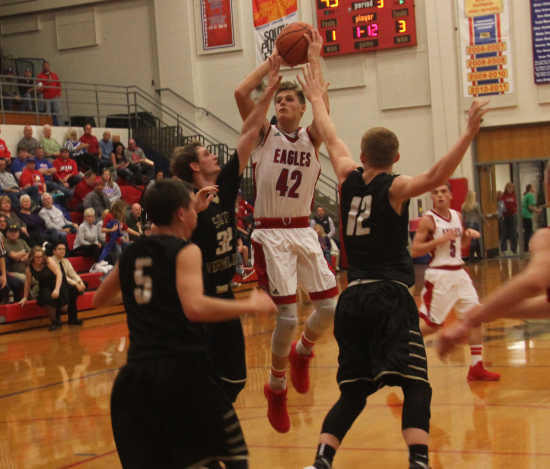 The only freshman on the All-Putnam County first team is Allen Plunkett from South Putnam. His 15.2 points per game was second in the WIC West and fifth in the conference.

The freshman was the biggest part of the Eagle offense, shooting 45 percent from the field. Plunkett helped South Putnam to two of its wins in dramatic fashion with a game-winning three-pointer at home against Bloomington Lighthouse and another game winner against North Putnam in the Putnam County Classic.

North Putnam's season stats weren't available on maxpreps.com due to some computer hardrive issues however North Putnam's Austin Judy earned a spot on the All-County first team. The senior was confident shooting from all over the floor but usually preferred to use his ball-handling skills and try to open jumpers inside the lane for himself and teammates. 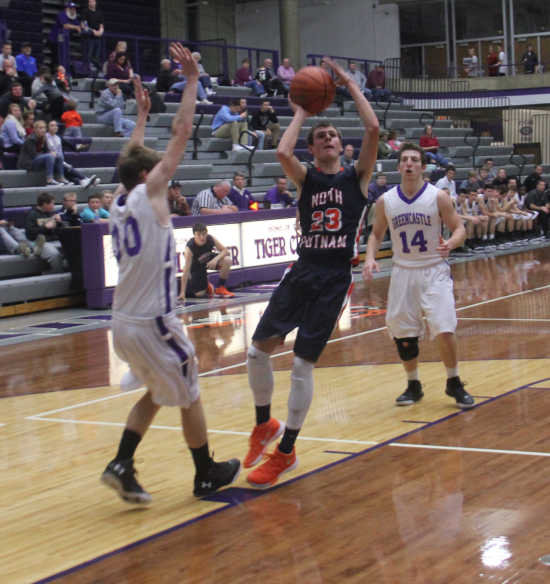 Judy was efficient at finding his teammates as well once defenders began committing more defensive pressure which they tended to do once he got rolling.

After a tough start to the season North Putnam managed to string together four wins after the county tournament and the Cougars were noticeably improving thanks to the coaching and the leadership.

The All-County second team features two more Cougars, one of which North Putnam fans will be happy to see for two more seasons and another that will be missed on the hardwood.

Treyton Smith earned the All-County second team spot due to his offensive prowess.

Smith was essential in the Cougar scoring because he could get around his defender easily which is how North Putnam usually got its offense rolling.

Once in the lane Smith was athletic enough to either finish at the rim, make a quick pass to a post player or kick it back out for an open shooter.

Kyler Jeter, the North Putnam senior, was a force on the inside helping to give Smith another option when he went to the paint.

Whenever Greencastle needed a score and Coble being double teamed, the Tiger Cubs new they could count on Colin York to provide GHS with decent scoring and a lot of effort. The sophomore scored 12.5 points a game and dished out three assists per game.

Cloverdale had the added benefit of Nick Winders from three-point land and CHS certainly enjoyed it. Winders provided five points per game and was a problem for defenders who usually got lost in the shuffle chasing around Moore and Neese.

South Putnam had a huge senior class this season and all will be missed as each played an important role. Jimmy Rutter was a big part of the South Putnam gameplan each night. He recorded 6.8 points per game and 4.8 rebounds a game. He was a consistent scoring threat for the Eagles and he was able to play big or small depending on how defenders played against South Putnam.