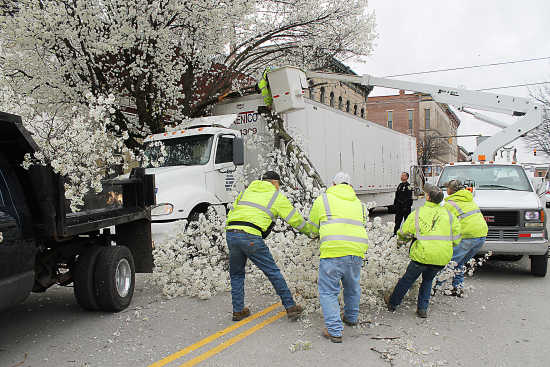 Clearing the road for traffic on South Jackson Street, Greencastle Public Works employees pull a large limb from atop a semi trailer Monday morning. The semi, driven by Randall Giles of West Terre Haute, broke two large limbs off the pear tree during a delivery to Greencastle Offset Printing.

Spring has sprung in Indiana and Bradford pear trees are in full bloom.

Unfortunately, one such tree in downtown Greencastle is worse for the wear after a Monday morning run-in with a semi trailer.

The vehicle took out two large limbs of the tree in front of Greencastle Offset Printing, 2 S. Jackson St., closing traffic on the block for a short period.

Randall L. Giles, 53, West Terre Haute, was southbound in a 2007 Freightliner semi with a trailer. The truck and trailer were registered to P J Trucking, also of West Terre Haute.

Giles told GPD Sgt. Ed Wilson he was trying to make a delivery to Greencastle Offset Printing. With Monday being his first delivery to the Greencastle business, he was unsure where to make his delivery.

As Giles pulled to the side of the road in front of Greencastle Offset, he believed he had cleared the tree, but instead broke off two large limbs, one of which fell into the road over the front of the trailer.

Damage to the truck and trailer was minimal.

Several workers from the Greencastle Department of Public Works responded to the scene to clear the debris from the truck and the roadway. This included cutting the wood into more manageable pieces and even employing a bucket truck to get a large branch off of the truck.

Sgt. Wilson was also assisted at the scene by officers Darrel Bunten and Kyle Lee, along with Assistant Chief Brian Hopkins.