INDIANAPOLIS -- The Russell Township farm owned by the Clodfelter family since 1916, was honored Monday as one of 46 Indiana properties presented with a Hoosier Homestead Award.

Owner Gene Clodfelter and other members of his family were on hand at the Indiana Statehouse as Lt. Gov. Eric Holcomb and Indiana State Department of Agriculture (ISDA) Director Ted McKinney presented the families with Hoosier Homestead Awards in recognition of their commitment to Indiana agriculture. 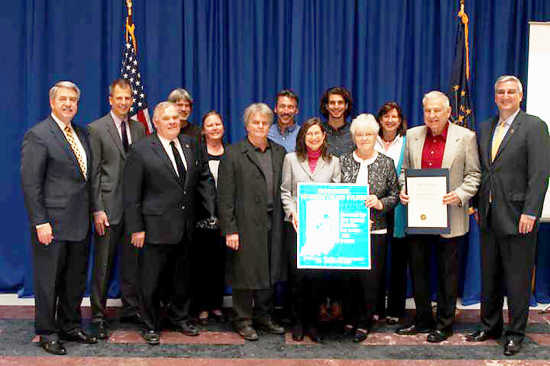 Gene Clodfelter (second from right) of Putnam County and his family are honored Monday by Indiana Lt. Gov. Eric Holcomb (right) and Indiana State Department of Agriculture Director Ted McKinney (left), along with District 24 State Sen. Pete Miller (R-Brownsburg) and District 44 State Rep. Jim Baird (R-Greencastle), during a Hoosier homestead ceremony at the Indiana Statehouse. Since its beginnings in 1916, the Russell Township farm has been continuously in the Clodfelter family for the past 100 years.

"There are close to 60,000 farming operations in Indiana, of which 98 percent are still family owned and operated," said Lt. Gov. Holcomb, who also serves as Indiana Secretary of Agriculture and Rural Development. "These families are a fundamental piece of the Indiana story, and I congratulate them on earning the Hoosier Homestead Award and their unwavering commitment to both the past and future of Indiana agriculture."

To be named a Hoosier Homestead, farms must be owned by the same family for more than 100 consecutive years, and consist of more than 20 acres or produce more than $1,000 of agricultural products per year.

"Our state's legacy has been shaped by Indiana's farming families, who have passed down their traditions from generation to generation and contributed so much over the past 200 years -- both economically and socially," Director McKinney said. "It was an honor to recognize nearly 50 of these great families at the Statehouse, and I commend all of them on their tremendous dedication to the industry and, especially, to Hoosiers."

District 44 State Rep. Jim Baird (R-Greencastle) noted that in addition to the Clodfelters of Putnam County, three other families in his district received the designation:

-- The Floyd-Wrightsman Family Farm of Parke County, which has been in operation since 1865, received the sesquicentennial award.

-- The Mace Family Farm of Clay County, which has been in operation since 1916, received the centennial award.

-- The Swinehart Family Farm of Morgan County, which has been in operation since 1894, received the centennial award.

"Our economy thrives off of Indiana farms, bringing in more than $44 billion and employing 190,000 Hoosiers," Baird said. "The agriculture industry is the foundation of our state, and reaching the milestone of owning a farm for more than a century deserves recognition."

Two awards ceremonies are staged each year, in the spring and summer, to commemorate the achievements of farmers across the state.