The prestigious scholarship will provide full tuition and fees for four years' attendance at any Indiana college or university. In addition, winners receive a $900 annual stipend for required books and equipment. The son of Scott and Beth Wilkerson., he intends to study computer science at DePauw University.

"I am deeply honored and grateful to be recognized with this award," Wilkerson said. "It was a goal that I set at the beginning of the school year. There are so many great students, not only in my class here (at GHS), but also at the other schools in the county that I am truly honored be selected as the Lilly scholar."

Selection criteria for the Lilly Endowment Community Scholarship is based on scholastic abilities and intellectual pursuits, capacity to lead and motivate fellow students, social commitment and extracurricular involvement, and the ability to articulate career plans that demonstrate motivation and initiative. 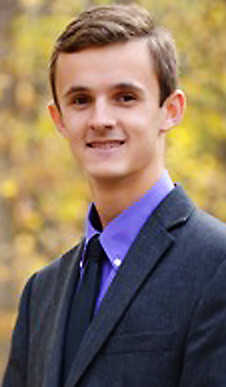 While informing Wilkerson that he was the 2016 Putnam County Lilly Scholar, Debbi Christy, chairman of the LECS Selection Committee, commented, "At every step in the process the committee recognized to a greater depth that you choose to pursue excellence in every area you are involved and the committee was inspired. We have no doubt that you will always be driven on your journey by excellence, and you will continue to inspire people."

In a letter of recommendation a teacher wrote of Wilkerson, "To date I have written exactly 82 college recommendations. Rarely, do I have the opportunity to write the following: Zach is perhaps the perfect student. He is respectful, well-respected and a natural leader. He is curious and hard working. He is humble. He is an excellent follower."

The recommendation concluded with, "Zach has the tools for greatness, the work ethic to achieve it, and the integrity to act with grace in victory and defeat."

During his career at Greencastle High School, he has been involved in a wide variety of activities.

A gifted musician, Wilkerson has been a member of the GHS Concert Band and DePauw Honor Band for each of his four years of high school serving as a section leader for three years. He is also a member of the Classics Honor Choir and has received gold medals at the Indiana State School Music Association in choir, solo vocal performance and ensemble instrumental competitions.

As an athlete, Wilkerson has participated in soccer and basketball all four years, being selected captain and lettering this past season in basketball. As a four-year soccer lettermen, he was selected MVP for both his junior and senior years, elected captain as a senior, and has been recognized as an all-conference performer in each of the past three seasons.

Outside of school, he serves the community. Wilkerson has helped build wheelchair ramps for community members having difficulties accessing their homes through the SAWS program at Greencastle Presbyterian Church. He was also selected to coordinate the local "Celebrate My Drive," a statewide initiative to promote distraction-free driving. His poster series, featuring GHS students, were displayed throughout the school and community. He also serves as a member of the Putnam County Youth Philanthropy Committee.

Academically, Wilkerson has excelled as well. He will be graduating as a valedictorian with an Academic Honors Diploma. He is a National Merit Scholarship semi-finalist and was recently named a 2016 U.S. Presidential Scholar candidate; 4,000 students were selected as candidates from a pool of 3.3 million students. Wilkerson has also received many awards as the outstanding student in a wide range of academic courses including biology, foreign languages and mathematics.

The LECS is selected following a review process by the Lilly Endowment Community Scholarship Selection Committee from the Putnam County Community Foundation. The Selection Committee was composed of eight voting members, with two members residing within each of the geographic areas served by the four county school corporations. The Lilly Endowment Community Scholarship is highly competitive. There were 22 qualified applicants for the one scholarship award. The selection process included a blind review for the first three phases, followed by a dinner in which the Selection Committee met with nine semifinalists. The selection process concluded with six finalists having individual interviews with the committee.

Following the personal interviews, the committee submitted its nominee and alternates to Independent Colleges of Indiana (ICI) for final approval. ICI is a nonprofit corporation that represents 31 regionally accredited degree granting, nonprofit, private colleges and universities in the state. The scholarships are the result of a statewide Lilly Endowment initiative to help Hoosier students reach high levels of education.