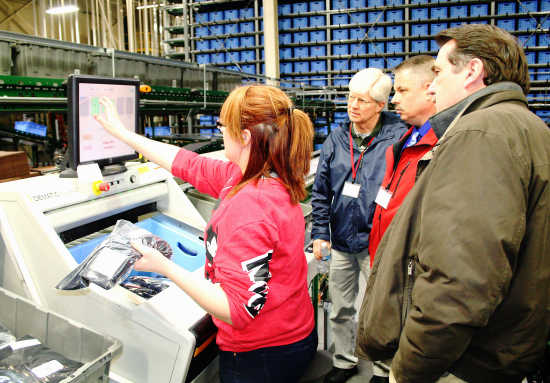 Sorting orders for processing at a goods-to-person station, Ascena associate Courtney Smallwood demonstrates the picking and shipping process for participants on the Greater Greencastle Chamber of Commerce quarterly luncheon tour Wednesday, including Mayor Bill Dory (right) and Ken Carrington (back left). Ascena is continuing to expand its 800,000-square-foot facility on the city's East Side. (Banner Graphic/ERIC BERNSEE)

The sprawling Ascena Retail Group building --- which began life more than 60 years ago as a location where IBM made computer punch cards -- has been reborn as a 100 percent E-commerce center.

In the same 90 minutes that Chamber members spent meandering through the vast facility, any number of orders for Lane Bryant, dressbarn, maurice's, Justice or Catherine's goods were placed by online consumers from Walla Walla, Wash., to Kalamazoo, and picked and shipped out by Ascena associates in Greencastle using FedEx SmartPost, Fed Ex Ground, UPS Express or the U.S. Postal Service.

Kyle Davis, assistant vice president for distribution center operations at Ascena, advised that the latest equipment installed at the plant is not only state-of-the-art but "probably as good as you can get."

"We've invested a great deal of money in technology," he said prior to the group getting a firsthand look at the new equipment on their tour.

Davis told Chamber members his favorite part of the shipping process in the EMS system, which automatically picks the product and brings the goods "to a person who stands in one place all day long."

The company, which will be adding the Ann Taylor and Loft brands this summer, focuses on two things, Davis said, "getting the customers what they need" and creating a work environment that makes people want to work at the Greencastle Fulfillment Center.

"What drives customer loyalty," he said, "is how quick we can get them the product.

"That's something that's always on our minds," Davis added, "how can we speed up the process?"

The additions of Ann Taylor and Loft will increase shipments by 40 percent. 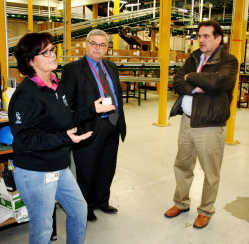 That, Davis assured, will mean "quite a bit of additional hiring."

"We are very focused on being able to attract people," he added, "because we're expanding."

To aid in that hiring process, the company will be bringing in a labor specialist to analyze the market and its needs.

Another 200-300 can be expected for the peak season, Davis said. Peak volume usually occurs two weeks before Christmas.

The coming brand additions also will likely mean a jump from 95,000 SKUs (stock keeping units) to 140,000 SKUs or items tracked as inventory.

The plant has packed and shipped as many as 318,000 units in one day and does 30 million annually, so it "basically turns over inventory five times a year," Davis said.

The addition of the Ann Taylor line is expected to bump Ascena's annual shipped unit total to 44 million.

Ascena's Bruce Wong, assistant vice president for maintenance and engineering, told the luncheon gathering that 90 percent of the orders received at the fulfillment center are shipped out the same day they are placed.

"At peak this year," Wong said of the effects of expansion, "we expect 1.2 million units to come down in one day."

Ascena cut the ribbon on its renovated and updated facility last May, and almost a year later is still expanding its operations. The company is also scheduled to open another distribution facility on the West Coast.