With an estimated 175 people gathered at the Bainbridge Community Center, Gregg discarded the more whimsical mustache-centric campaign that marked his 2012 run at the Indiana governor's office for a more serious, issues-dominated effort. 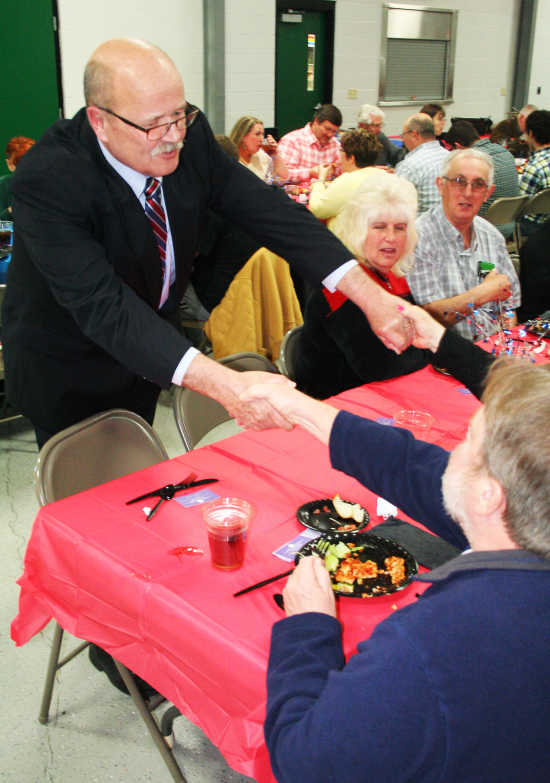 Reaching out to shake hands with a pair of supporters, Democrat gubernatorial hopeful John Gregg makes his way through the crowd at Sunday's 2016 Putnam County Democrat Kickoff at the Bainbridge Community Center. The kickoff marked the start of the District 44 Indiana House campaign of Greencastle's Kim Fidler. Banner Graphic/ERIC BERNSEE

In addition to pledging "100 percent support" for the campaign of Greencastle's Kim Fidler in her quest for the District 44 Indiana House of Representative seat held by Republican incumbent Jim Baird, also of Greencastle, Gregg concentrated on three issues -- education, employment and inclusion.

"There are all kinds of things we can do to make Indiana a better place," the Sandborn Democrat said, "and we're going to do them.

"We can do better, and we're going to focus on things that matter to Indiana."

"I'm excited about 2016," he said. "It's going to be a great year for all Hoosiers -- especially Democrats and thinking Republicans."

What the election is not about, Gregg said, is discrimination.

"It's about making Indiana an inclusive place."

Likewise, it's not about saying Indiana doesn't welcome all people, he continued.

"It's about saying we do welcome them."

It's also about good-paying jobs and restoring the vitality of the middle class.

"And it's about ending the war on public education and our school teachers," Gregg stressed to a spontaneous burst of applause.

"How do we improve our schools?" the 61-year-old Democrat candidate asked. First of all, he said, "teachers have to be part of the solution."

Both Fidler -- a South Putnam High School Spanish teacher for 16 years who has been a UniServ director for the Indiana State Teachers Association the past 10 years -- and Indiana Superintendent of Public Instruction Glenda Ritz would be major allies in Gregg seeing the latter through, he said.

He said talking to educators around the state, it's impressive how many people Fidler has helped and how important she has been in resolving school issues in several districts.

"She's worked so hard for so many people all over the state," Gregg praised, "imagine what she could do right here in your community."

He characterized Fidler as having the ability to be a "great legislator in the tradition of Susan Crosby (the former District 44 lawmaker from Roachdale)."

Taking on his gubernatorial opponent, incumbent Republican Mike Pence, Gregg reminded the audience that a campaigning Pence said back in 2012 that he had a solution to fixing Indiana's crumbling roads.

"Four years have passed," Gregg said, "is your road any better?" 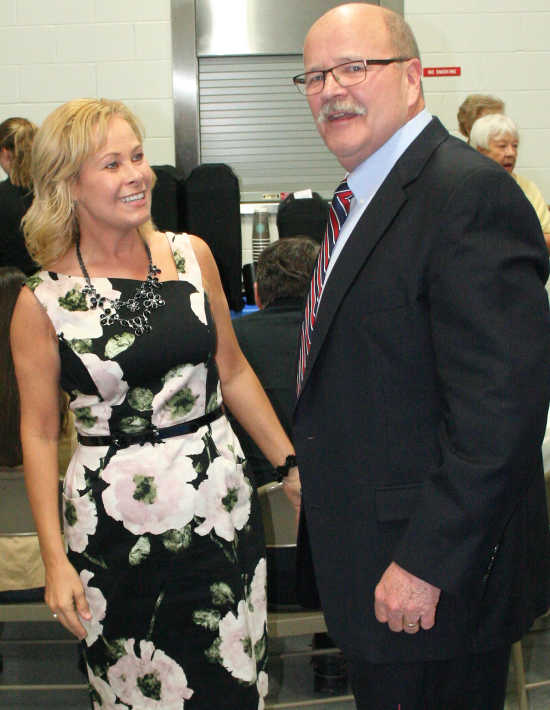 He also hit Pence for a serious lack of leadership.

"If Indiana were a corporation -- a corporation of 6.5 million shareholders across the state with 2.7 million voting members -- he (Pence) would be fired," Gregg assured.

Gregg knows that political demographics are not on the side of he or Fidler. If he got every single registered Democrat vote in the state, he said, that would only leave him with 47 percent. He and Fidler both need the "good-thinking Republicans" to hear their story and give their support.

"We're not going to get the Tea Party people or those on the fringe," he said of Republican voters.

But the thinking Republicans are winnable, Gregg said.

Fidler, meanwhile, told supporters she has "already decided if I simply have a goal to reverse all the bad laws that have been voted for by the incumbent, I'll be very busy"

Nonetheless, her priorities will be education, civil rights, the economy and roads and infrastructure.

"I've been accused of being a one-issue (education) candidate by my opponent," she said, "but that is far from true."

What really prompted her to become a candidate, she said, was hearing officeholders far too often respond to constituents with -- "We need to agree to disagree on issues."

"That did not sit well with me," Fidler added, stressing that it seems disingenuous to tell the very people who elected you to represent them that they need to learn to "agree to disagree."

Fidler is unopposed on the Democrat primary ballot and will be running against Baird, who is seeking a fourth term representing District 44, in the Nov. 8 election.

The audience also heard Sunday from candidate Phil Webster, a one-time North Putnam High School baseball coach, who is running in State Senate District 35 (which does not include Putnam County).

Webster said if Hoosier Democrats can "take down some of the big dogs" in the Republican general assembly contingent, it at least might "wake them up to the word 'compromise.'"