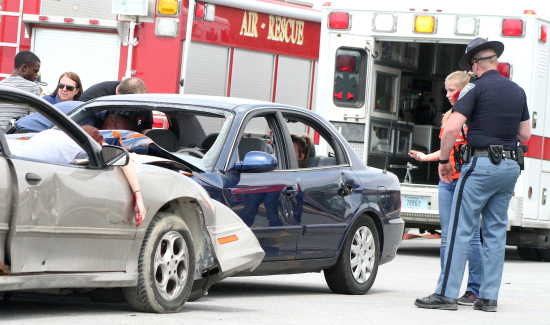 Six student-actors, four fire departments, two rescue teams and two police departments collaborated for weeks in advance to set up a mock-crash scenario in the high school's west parking lot ahead of this weekend's prom activities.

Though fun and excitement are encouraged by all for those attending the proverbial prom night, the also notorious evening annually spells disaster for many young adults around the country.

North Putnam High School Principal Jason Chew, however, hopes not to see any of his students' names added to that list.

The presentation, he said, will help with that.

"Luckily, I have not had to add any names to that list," Chew said as he addressed his students during a subsequent convocation in the school's gymnasium. "I'd like to keep that record perfect. Do the right thing, be smart. I've talked to you before about drugs and alcohol, but the things in your pocket are just as dangerous. 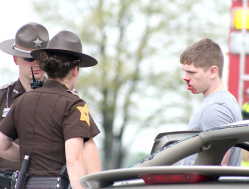 The scene, which was already in place at 12:45 p.m. when more than 400 students converged outside the building, showed two vehicles in a head-on collision with six students (two in a coupe and four in a sedan) found unresponsive.

Indiana State Police Trooper Charlie Boller was also on scene with loudspeakers to enact a sort of command center through which students could hear what an actual dispatch would be for the scenario.

"McRoy was in the middle of sending a text message while driving," Robinson said. "She failed to observe a stopsign at an intersection ... and failed to yield to an oncoming car driven by Barnett.

"As a result ... Lyons died instantly and Krominaker sustained critical injuries, requiring transport by helicopter," Robinson continued. "After investigation ... McRoy was at fault and Barnett was found to be under the influence."

As workers began to clear the scene of debris and remove the victims from the vehicles, both Barnett and McRoy were metaphorically arrested and taken away, showing the consequences of such actions in front of the large crowd of students.

Other victims were taken away via ambulance with Krominaker air-lifted to St. Vincent Health.

Brittany Hardy was the first to speak. Hardy was involved in a horrific crash when she was in high school in the early 2000s, herself ejected from the vehicle and thrown "the distance of a basketball court."

"I was 15 when it happened and it's taken 15 years to come to terms with it," Hardy said. "I've spent the same amount of time recovering from that bad decision as I had lived at that point."

Another speaker, Barbara Wey, had been recently charged with an OWI (Operating While Intoxicated), resulting in severe injury.

"I made a bad decision and it will haunt me for the rest of my life," she said.

"I had fun at my prom and we want you to have fun at yours," Bookwalter said. "Just don't lose your common sense. Be smart." 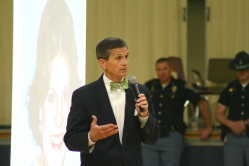 Trooper Robinson ended the convocation with a heart-felt speech.

"This is what we do not want to have happen to you," Robinson said, citing the many examples given by the special speakers. "When you are the driver of a car, you are responsible for your occupants' lives.

"Do not take it for granted, ever."

Fire departments from Bainbridge, Roachdale, Russellville and Floyd Township were present, as well as authorities from the Putnam County Sheriff's Department and Roachdale Police Department.